5×5 With The Hook: Daniel Maslany.

He’s at his best when he steps to the left of convention and plays quirky, fascinating characters like Murdoch Mysteries‘ unconventional Det. Watts of Station House No. 1 and Bondurant Smit on Four In The Morning.

He is Daniel Maslany and he’s here today to answer five questions and chew some bubble gum. Sadly, I’m all out of bubble gum…

You know the drill by now, right? This is where I tell you a bit about today’s victim guest and we all walk away more enlightened for the experience.

In the CBC comedy, Four in the Morning, Daniel plays an eccentric young man from Manitoba who moves to Toronto and has a series of life adventures with a group of equally unique friends. The show bills itself as “an unconventional comedy spiked with a touch of magical realism. The show follows four friends in their twenties as they navigate life at the unpredictable, emotional, but illuminative hour of 4 a.m.”

And they’re all impossibly-beautiful vampires.

In other words, this show is cut from a different cloth than conventional television comedies – and that’s its greatest strength.

But who is Daniel Maslany really? 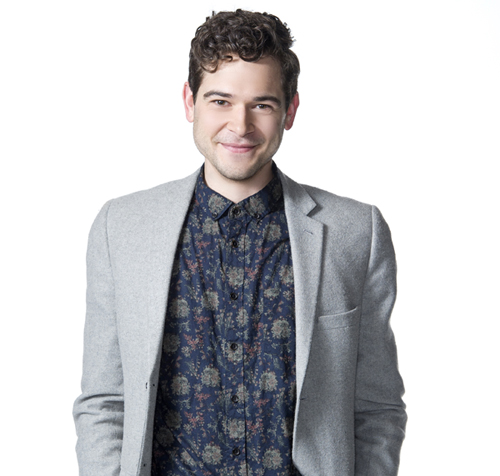 Well, from what I can tell he’s an up-and-coming actor with a desire to tinker behind the lens on occasion. He has strong family ties; his parents put Daniel and his two siblings into drawing, dance, acting, and filmmaking classes. His brother became and animator and his sister became an actress. Daniel developed a passion for music and writing but at the moment acting is his primary focus.

And that’s been great news for Murdochians like me as Daniel has clearly used his background in theatre to infuse Detective Watts with over-the-top qualities that make the character endlessly fascinating. Honestly, we’ve only seen this guy once and I’m already rooting for him to have his own series.

You can learn more about Daniel’s acting creds here but now it’s time for the query portion of today’s program. Here we go…

ONE)  We’re both proud Canadians but it turns out we both grew up with German influences in our lives; what’s your favorite German dish?

I’m a big fan of the kloesse that my Oma and Mom make. They are the perfect addition to a meal. And who can beat a good old German pretzel? My other side is Ukrainian so I really can’t escape the good food.

And now you’ve got me missing home. Thanks for that!

TWO)  I get the sense your creative engine could take you anywhere but would you be open to playing Det. Watts in an ongoing series, even as a supporting character?

I really enjoyed playing Watts, and would of course be open to playing him again. I think he definitely works well as a fish out of water. The whole cast and crew were super welcoming and inviting on the show, so it was a great experience. 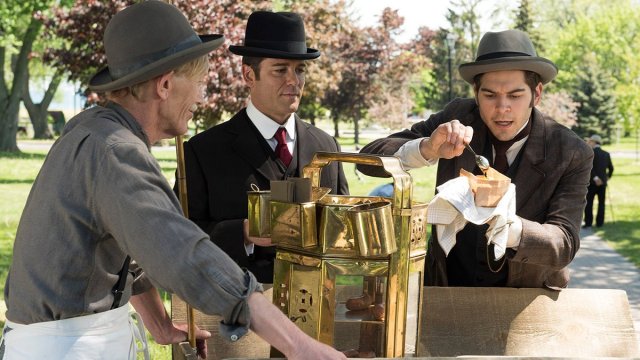 “Man, I’m starving! The Hook never puts any food out during these interviews!”

THREE)  If cloning was an actually possibility would you want more than one sister running around?  (I’m going to let my readers figure out where this question came from on their own. Hit the internet search engines, people!)

Absolutely! Why not? The world could use a few more of her anyways! And while you’re at it my brother could use some clones too so he could hire them as his assistants for his insanely time consuming and detailed animation work. Yes, more of my siblings please! They’re the best.

(Not the answer I was expecting – brothers and sisters tend to drive each other around the bend – but it’s refreshing to see someone who genuinely loves their family.)

The Maslany clan back in the day: One of Canada’s most talented families.

FOUR)  Watts has a bit of a quirky side (to say the least) did he evolve naturally or did Simon McNabb and Co. present Watts to you and say… “Here’s the role! Go, be brilliant!”

It was a very collaborative effort and evolution from start to finish. Simon’s writing of Watts was fantastic, and very rewarding to be able to bring to life. He created this character with many quirks and peculiar opinions but they all felt grounded in a believable and playable reality.

Then in shooting we were able to see what other realms that groundwork took us to. Norma Bailey was always feeding me such playful, and propelling directions for every scene to get to focus on and incorporate. And early on, Peter Mitchell gave me a really inspiring larger picture frame work within to find who Watts was.

(See why I’m always saying MM is such a brilliant show?)

FIVE)  As Bondurant Smit on Four In The Morning you play an over-the-top trumpet player. (Why I’m telling you this, I don’t know.)  If you could be any musical instrument what would you choose?

Oh, I’m so pleased that you’re asking a question about our incredibly weird show!

(Again, I live to serve, Daniel. And by the way, Four in the Morning is a show worth checking out, friends, its brilliantly-offbeat.)

Bondurant is my very own strange alter ego, emphasis on his ego part. He’s certainly always tooting his own horn. GET IT? I think Bondurant probably believes he IS his own trumpet. But for me personally, I would be a theremin. I was actually gifted one many years ago, and had decided to make some audio recordings of me “playing” it. (I had no idea what I was doing.) When I started messing around with it a few feet from my computer, all of the different windows of open programs on my desktop started dancing around on the screen on their own. It was the spookiest thing.

So based on that terrifying experience, I believe the theremin has the capability to inhabit other devices with its spirit. So in being a theremin I would have the opportunity to be a ghost in all machines.

(Is Daniel awesome or what?)

Well, that wraps this 5×5 up, kids. I want to thank Daniel Maslany for being one of the coolest humans I’ve ever interviewed. Thank you for joining us today as I make Daniel realize he’s not the only quirky Canadian out there.

Husband. Father. Bellman. Author of The Bellman Chronicles. Reader of comic books and observer and chronicler of the human condition. And to my wife's eternal dismay, a mere mortal and non-vampire. I'm often told I look like your uncle, cousin, etc. If I wore a hat, I'd hang it on a hat rack in my home in Niagara Falls, Canada. You can call me The Hook, everyone else does.
View all posts by The Hook →
This entry was posted in Hotel Life and tagged CBC, Daniel Maslany, daniel maslany four in the morning, Four in the Morning, four in the morning cbc, Murdoch Mysteries. Bookmark the permalink.

13 Responses to 5×5 With The Hook: Daniel Maslany.