5×5 With The Hook: Alex-Paxton Beesley.

She’s one of my home and native land’s brightest lights.

She is trained in the art of deception. (As an actor, relax. She’s not a spy. That I know of.) She has eyes you could get lost in for a week. She is Alex-Paxton Beesley and she’s here to answer a few questions today.

Yes, I know I treat you all better than you deserve, but what can I say? I’m a people person at heart.

But back to today’s honored guest. APB (I sure hope she’s okay with me calling her that; I heard she’s a hair-puller.) was created and trained to be an ideal human in the teeming metropolis of Toronto. You Americans know it as New York in every movie ever made.

As a child wandering the mean streets of Toronto, Alex realized she wasn’t like other children. (Okay, it’s Canada, the streets weren’t that mean. Just go with it. You know my style by now, right?) It wasn’t just her telekinetic powers and hidden extra appendages that made her feel that way.

No, the truth is, young Alex quickly realized she enjoyed shedding her skin and becoming another person.

Luckily, someone pointed out to her that she could do the same thing – in a less painful manner – by becoming an actor.

And so she did. And she hasn’t looked back. Except when she feels someone is following her, of course.

Back to Alex’s acting career. On stage (the mark of a true thespian) she’s work with critically-acclaimed companies like Theatre Aquarius. On the small screen she’s paid her dues. And not just of the union variety.

Republic of Doyle. (She played the Republic. Luckily, TV puts a lot of weight on an actor.) Being Erica. Suits. (I’m not sure if she actually wore one but I bet she looked great.) Rookie Blue. Lost Girl. (She had the map. That’s just the kind of gal she is.) Beauty and The Beast. Warehouse 13. Alphas. The Firm. The Strain. (A huge hit that has real bite.) Alex has cut her acting teeth on these shows and more. She even appeared as a regular on Copper, an extraordinary show that’s gained a Murdoch Mysteries-worthy following in the last few years.

Not content to conquer one arena, Alex has done film work of the feature-length and short variety.

Oh, and before I forget, APB is the soul behind Lillie Dunn and Winifred ‘Freddie’ Pink in the Murdoch Mysteries universe.

Are you freaking out, my fellow Murdochians? I sure did when I landed this interview. Freddie is a wonderful character, ripe with possibilities and full of turn-of-the-century sass. And she provides insight into the good detective’s past, which is always welcome.

And now it’s time to turn things over to Alex herself. Take it away, APB!

ONE)  You’re developing a reputation for bringing strong female characters to life but if you could assume any male role in any film/TV show from any genre or time what would you choose?

Buster Bluth in Arrested Development. Or maybe GOB. Or Tobias Funke. Or basically any character in that show, male or female — including Ron Howard the narrator. Alternately, I’d want to play Dr. Mark Greene in E.R.

TWO)  If you could be any form of writing utensil what would you be?  (Yes, my mind train doesn’t travel on the same tracks as others.)

Typewriter. Does this count? I own several and I love them.

THREE)  What makes Alex-Paxton Beesley weak in the knees?  (Puppies? A romantic carriage ride in the rain – with puppies? Undercooked Chicken Parmesan?)

I once came home after a very hard day to find a bouquet of tulips leaning against my gate. Weak in the knees both from the unexpected gesture, and from being so proud of my city that they didn’t immediately get stolen.

(That is something to be thankful for. Score one for Toronto the Good.)

FOUR)  You’re a classically-trained thespian but what’s more stimulating: searching the depths of your soul to help create a dramatic character or acting zany in a screwball comedy?

Honestly, just anything that allows me to follow the thread of my imagination. I do love the drama (as a child all the stories I acted out with my Playmobil involved orphans and the scarlet fever) — but I’m pretty ridiculous in my regular life. 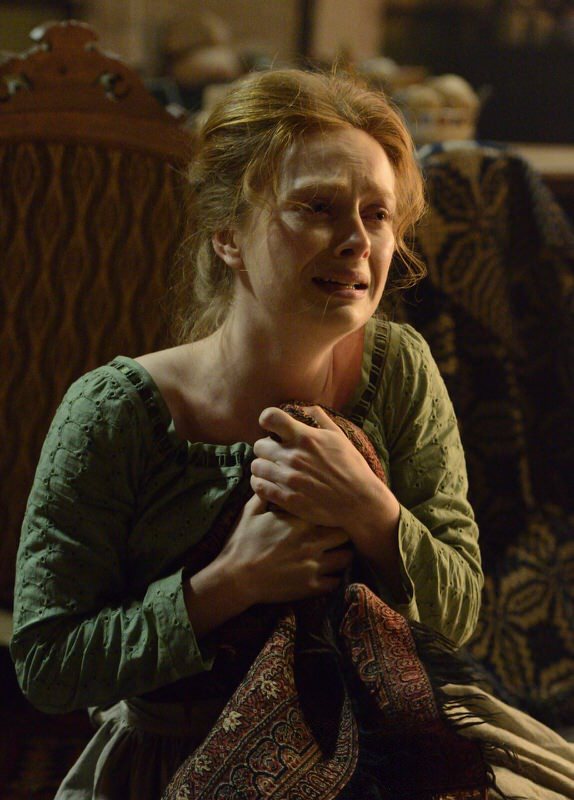 “Yannick Bisson was right! What have I done?”

FIVE)  This may be a no-brainer but would you be open to assuming the demands/pressures of starring in a Freddie Pink spin-off?

I LOVE Freddie. I’m currently working on another show for the CBC that I’m incredibly proud of, called PURE (premiering early 2017!) — but I’m always thrilled to wear Freddie’s hats. She’s such a strong, interesting woman and I love playing her.

I can never thank Alex enough for being here. So I won’t. (Yes, I am kind of a jerk, thank you for noticing.) I hope you’ve all enjoyed this week’s Murdoch Monday, friends.

And last but not least, here’s a piece of custom-made MM history, courtesy of our Twitter pal, Pete B. Thanks, buddy.

Husband. Father. Bellman. Author of The Bellman Chronicles. Reader of comic books and observer and chronicler of the human condition. And to my wife's eternal dismay, a mere mortal and non-vampire. I'm often told I look like your uncle, cousin, etc. If I wore a hat, I'd hang it on a hat rack in my home in Niagara Falls, Canada. You can call me The Hook, everyone else does.
View all posts by The Hook →
This entry was posted in Hotel Life and tagged 5x5 With The Hook, Alex-Paxton Beesley, Arrested Development, Copper, Murdoch Monday, Murdoch Mysteries, orphans, Republic of Doyle, scarlet fever, Suits, The Strain. Bookmark the permalink.

5 Responses to 5×5 With The Hook: Alex-Paxton Beesley.