5×5 With The Hook: Patty Sullivan.

It’s not often I can apply the word “hero” to a television personality but today’s guest is more than deserving of the designation.

Yes, I’m being serious; this isn’t one of those cases where I’m utilizing my patented hyperbole to maximum effect. The truth is, Patty Sullivan has been shaping young minds for decades (and no, Patty, this shouldn’t make you feel old!) and I can think of no cause more noble.

I told you she was a knock-out – with a brain, of course…

I remember cuddling with my daughter on the couch of my in-laws backroom where we lived for a time, watching Patty as she hosted the TVOKids on TVOntario (think Canadian PBS) stable of programming, which, by the way, was clean as a whistle and entertaining for all ages. PS held court on Kiddie TV Land from 1994 to 2003 before moving on to the hosting position at the Kids’ CBC block on Canada’s network, CBC from 2003 to last year.

I could publish volumes about the circumstances surrounding Patty’s forced departure from CBC but out of respect for her, I’ll stay quiet for once in my life.

Which sucks, by the way.

At any rate, between her two hosting gigs and an untold number of public appearances at malls, schools, special events, uprisings and beheadings (oh, that Hook!) Patty Sullivan has educated, entertained and guided millions of young people – and more than one adult – to a degree that cannot be measured.

If that’s not a hero I don’t know what is.

Plus, she’s smart as a whip (whatever that means) damn cute and has proven she can take whatever life throws at her and laugh it off while raising her own kids and being a kick-ass partner to her spouse.

As for the rest of her bio, PS graduated from the radio and television arts program at Ryerson University in the 90s, after which she fully intended to pursue a career as the world’s foremost super spy. You may be laughing but think about it: who could possibly suspect such a smiley-faced grown cherub of being a female Bond? She would’ve slain the competition. Literally, of course.

Sadly, Patty kept blowing her cover by stopping to educate every kid she encountered on good manners, morals and math. It’s tough to be a Bourne with girl parts when you’re making balloon animals for a target’s children. And so she pursued a career in journalism, cutting her teeth in news radio before taking over Canada’s provincial public broadcasters.

Since she left, CBC Patty has appeared on Murdoch Mysteries (Yay!), Conviction and the reboot of the beloved children’s series, Caillou.

ONE)  You’ve helped raise entire generations of kids (seriously, many parents just stick the little ones in front of the TV while they get ready for work, vacuum, guzzle wine, etc.) but what do you do to feel like an adult on occasion?

Well, I’m a parent, so “adulting” pretty much makes up most of my day!!

As for doing adult things that don’t involve my kids, I like taking in some theatre (FYI – if you haven’t seen Come From Away, it’s a must-see when it returns!), and the occasional non-animated movie, (preferably in a VIP theatre because… well… have you been to one?), or just simply going out for dinner to a restaurant that doesn’t have a kids menu!

(I have to agree with PS: Cineplex VIP cinemas are beyond AWESOME!)

TWO)  You’ve been cast as the voice of “Mom” and “Grandma” in a new online version of the beloved, internationally-known animated series, Caillou​; is voice work cooler that live-action performing because you can show up in sweat pants and hair curlers if you feel like it?

I don’t know if I’d say voice work is cooler, but not having to put on make-up and do my hair before going to work is definitely a perk!

Another perk is the anonymity of it. Unless you’re a very recognizable voice (like Morgan Freeman), it’s unlikely anyone will stop you on the street to say “Hey, aren’t you that voice in ___ show?” Not that I crave anonymity. Being recognized for work I’ve done is incredibly rewarding and humbling.

But to your point, if I’m going to work in pajamas, I’d rather not get recognized at that particular moment. All this to say, voice work is incredibly challenging. I think there’s this belief that it’s an easy job, when in reality, that’s the furthest thing from the truth. Like any actor, you have to be able to take direction and do multiple takes, and sustain a character for an extended period of time. But when the audience can only hear your voice, that adds a level of difficulty that isn’t there when you’re seen and can use facial expressions and body language. Some of that may be added to the animation later, but being able to translate all of those feelings through of microphone is extremely challenging. 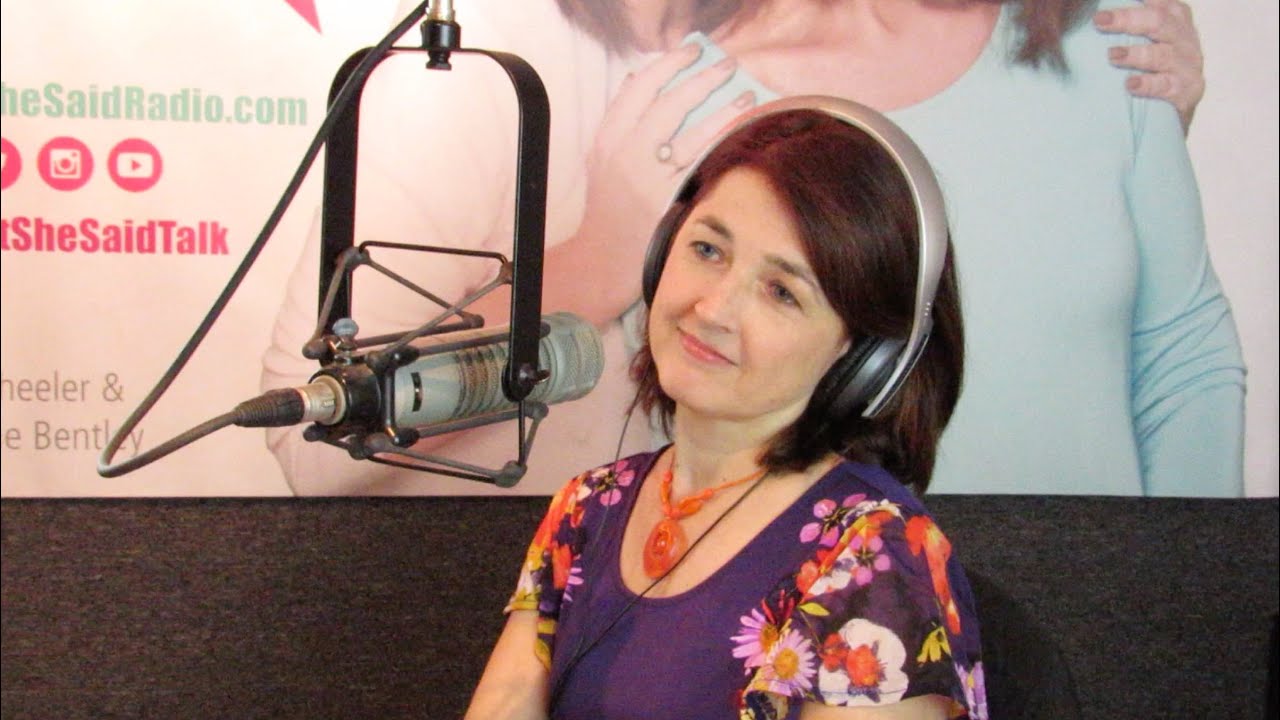 A coffee cup, a bunch of papers piled up, a paper towel roll and whatever craft stuff my kids have left there! I’ve worked in an office downtown and midtown for most of my career, so up to now, I’ve only ever used our dining room table as my “home office” desk. I guess I need to remedy that?

(I once grew an entire potato from a bunch of leftover McDonald’s fries I left on my desk at home… so you’re good, Patty.)

FOUR)  You’ve watched Canadian television programming shift and sway over the years from a unique perspective – to say the least – in your opinion, where are we at right now? Have we improved? Do we have miles to go? Are the Swedes kicking our butts?

I hope this doesn’t sound too cliché, but I think Canadian TV has always been breaking ground, and still is.

Back when I was a kid it was shows like Hilarious House of Frightenstein, The Friendly Giant, and later, Street Cents. Then we saw incomparable programs like Kids in the Hall and Second City TV. Not to mention Trailer Park Boys, Little Mosque on the Prairie, and Orphan Black. I could go on and on listing the great programs that Canadian productions churn out year after year.

And as for children’s television — what I know best — we continue to be world leaders. You’ve heard of Paw Patrol, right? So even though the way we watch programs may be changing, the content we’re making continues to be top notch.

Sweden may have given us IKEA, but we gave the world Degrassi.

(And Degrassi super fan, Kevin Smith, is eternally grateful that we did.)

FUN FACT!  Patty’s husband, Michael Kinney, appeared on Degrassi for 16 seasons as Coach Armstrong. Knowledge, even of a trivial nature, is power, kids.

“Did The Hook just reference me again?  I though the lawyers handled that.”

FIVE)  Canada, our home and native land, and home to more coffee shops per square mile than any country on Earth, is celebrating it’s 150th birthday this year; can you share five words that sum up your personal feelings about this great land, Patty Sullivan?

I’ve travelled to every province and territory in this great country, so I can honestly say it makes me feel proud, fortunate, optimistic, passionate and inspired. 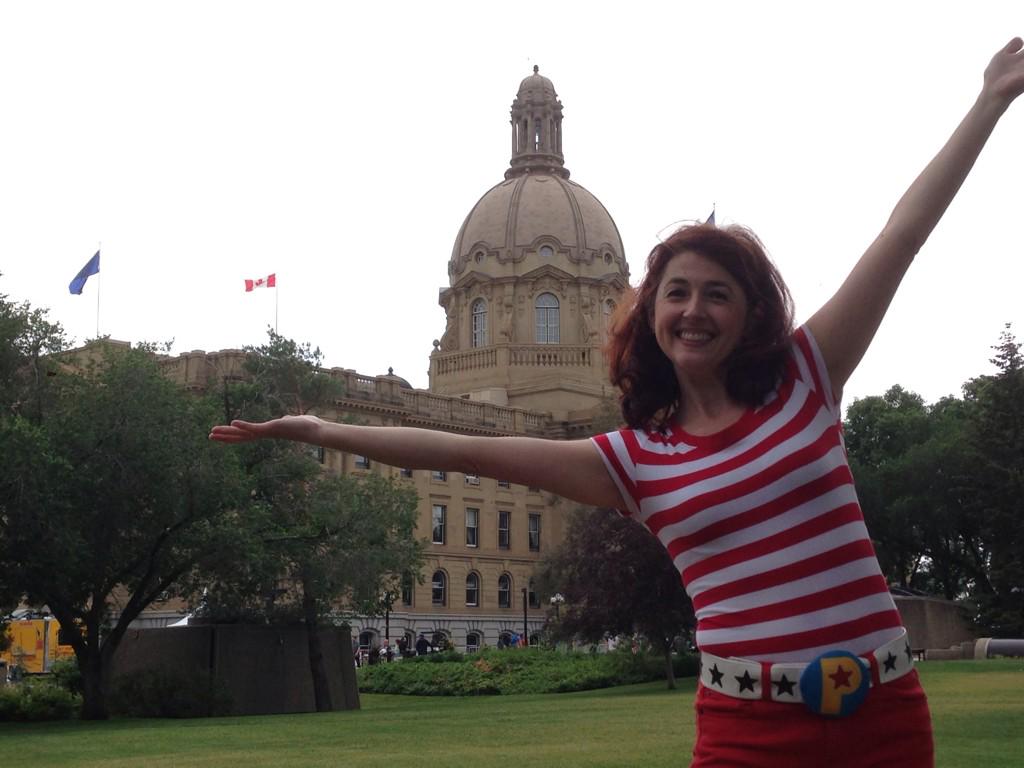 And there you go, kids, another 5×5 milestone featuring a real-life heroic figure that my family – and most likely yours – owes a debt of gratitude to. So thank you, Patty Sullivan – for everything.

Husband. Father. Bellman. Author of The Bellman Chronicles. Reader of comic books and observer and chronicler of the human condition. And to my wife's eternal dismay, a mere mortal and non-vampire. I'm often told I look like your uncle, cousin, etc. If I wore a hat, I'd hang it on a hat rack in my home in Niagara Falls, Canada. You can call me The Hook, everyone else does.
View all posts by The Hook →
This entry was posted in Hotel Life and tagged Caillou, CBC, Conviction, Degrassi, Kds' CBC, Kevin Smith, Murdoch Mysteries, Paty Sullivan, TVOKids, TVOntario. Bookmark the permalink.

11 Responses to 5×5 With The Hook: Patty Sullivan.