Did Hell To Pay Actually Pay Off?

A lot of promises were made in regards to Hell To Pay, the Murdoch Mysteries Season Ten finale; the question is: Did Peter Mitchell and Company deliver? 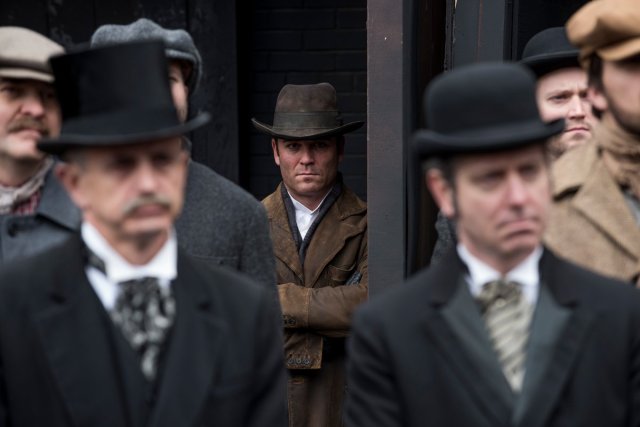 This pic’s too good to not use again…

ONE)  William’s not-so-cat-like-reflexes and Brackenreid’s not-so-sharp shootin’…  I suppose I understand why the Inspector would miss, but why the heck did William Murdoch just stand there in the middle of the street after someone took a shot at him? Still, as far as openings go, it was both intriguing and thrilling, exactly what you want from a finale, right?

TWO)  Some timeline bumps.  First Murdoch mentions that Julia is away at a conference then he sees Julia at the morgue and she mentions her trip – that she hasn’t taken yet. Then there’s the reenactment of the crime that set things in motion; we were given two different versions, though to be fair, this was a storytelling device not a mistake. So overall, well done, scribe Peter Mitchell.

Speaking of PM, read this interview with TV ‘eh? if you want to see what’s in store for MM Season Eleven. You won’t be disappointed.

THREE)  The ninja-like, turn-of-the-century bad guys.  How did the minions keep breaking into William and Julia’s apartment without making a sound? First they sneak up on the good detective and knock him out long enough to slip him into bed with a burlesque corpse and then they grab Julia? If you’re a gifted inventor like Det. Murdoch, with enemies that once included James Gillies, wouldn’t you intruder-proof your apartment?

What do you mean I’m about to die?  I have a mortgage!  It’s bad enough the CBC is paying me in Canadian Tire money!

FOUR)  A riddle to stump the Artful Detective himself?  How do you unravel a criminal knot tied by a high-ranking politician and a industrialist with super deep pockets? Especially without your usual resources and back-up? William couldn’t exactly walk into the bullpen and say, “What have you, George?” could he?

No, he had to do that in a church – and then both he and George returned to that same church even after they knew the corrupt cops were aware of the locale. Another plot hole that was necessary to the overall storyline.

Speaking of the crime itself… it tied into the Great Fire and it played upon the most simple criminal urge: the lust for money and power.

FIVE)  A place for everyone in Hell.  Hell To Pay gave every member of the MM cast – except for Miss James and Mrs. B, of course – a role to play. Louise Cherry (whom we haven’t seen the last of) and Nina Bloom played integral roles. The guest stars were top-notch. Even Jackson and Higgins contributed… though mostly as canon fodder in the last act.

SIX)  The true test of friendship.  Crabtree showed his true colors (and got his best girl, Nina Bloom, back in the process). Inspector Brackenreid pushed back against the corrupt forces around him and would up a free agent. Again.

In the end, we were reminded of MM’s greatest strength, the bond between the characters and their collective devotion to see justice done, regardless of the personal cost.

And speaking of that very personal cost…

SEVEN)  The bloodiest last act since that season finale of Dallas where they wiped pretty much everyone out.  But unlike that finale, I doubt this whole thing will turn out to be a dream of Julia’s.

But back to that mass possible culling of the MM cast: Was that crazy or was it cray -cray? I’m certain the Inspector survived his battle with that snake Chief Constable Davis. Or did he?

I’m certain Slugger Jackson bit the Church bullet (literally) since his “alter ego” is pretty busy on Orphan Black. But I could be wrong.

Higgins and Crabtree are most certainly wounded but you can’t lose a clown like Higgins and even though Jonny Harris is Still Standing for CBC (see what I did there?) I’m certain he’ll be around for more MM. Though what do I know?

They wouldn’t possibly kill Julia? Would they?

And William isn’t doomed. Is he?

Not if a certain someone has anything to say about it…

EIGHT)  Detective Watts is back!  Daniel Maslany was listed in the opening credits so I knew he was bound to show up eventually – but they really cut it close…

His appearance was the sole glimmer of hope in an otherwise grim episode. But what a glimmer it was, right? It’s been suggested that Det. Watts has an ulterior motive but there’s been nothing to suggest that so far. Either way, Daniel Maslany is a joy to watch so we win either way.

Come with me if you want to live, Detective Murdoch…

Well, that’s all I have for you today, kids. I’m still reeling from the aftershocks of this show-changing ep, as are you no doubt. As for the question I posed at the beginning of this post, that’s something only you can answer for yourself. Personally, I think Hell To Pay scribe Peter Mitchell can be proud of the fact he wrote the greatest cliffhanger in CBC history.

Husband. Father. Bellman. Author of The Bellman Chronicles. Reader of comic books and observer and chronicler of the human condition. And to my wife's eternal dismay, a mere mortal and non-vampire. I'm often told I look like your uncle, cousin, etc. If I wore a hat, I'd hang it on a hat rack in my home in Niagara Falls, Canada. You can call me The Hook, everyone else does.
View all posts by The Hook →
This entry was posted in Hotel Life and tagged CBC, cliffhangers, Daniel Maslany, Hell To Pay, Murdoch Mysteries, Peter Mitchell, Yannick Bisson. Bookmark the permalink.

18 Responses to Did Hell To Pay Actually Pay Off?