I asked, you answered.

There are only a few episodes of Murdoch Mysteries left in MMX and I think it’s time look back, at least briefly. So today I’d like to examine the gift that has been MM season ten and the road so far.

With your help, of course.

It’s been an interesting journey, one that has left viewers with mixed feelings, to say the least. Don’t get me wrong, in my opinion this show has actually evolved rather than become stagnant and repetitive.

But not everyone likes change.

My wife, for example, has been less than receptive to some of the biggest changes in MMX. Namely, the shift in focus from established characters like Constable  George Crabtree (Jonny Harris) and Inspector Thomas Brackenreid (Thomas Craig) to new blood like Det. Watts (Daniel Maslany) and reporter Louise Cherry (Bea Santos). To be honest, the occasional absence of Crabtree and the prolonged absence of Brackenreid left me irritated, to say the least.

That said, Maslany and Santos are both amazing actors who have revitalized MM with their original performances and intriguing characters. Miss Cherry is much more than a one-note, poor man’s Lois Lane. Watts is a character on par with William Murdoch himself, with an exceptional mind, a curious intellect, emotional baggage, a strict moral code – but little or no social skills. 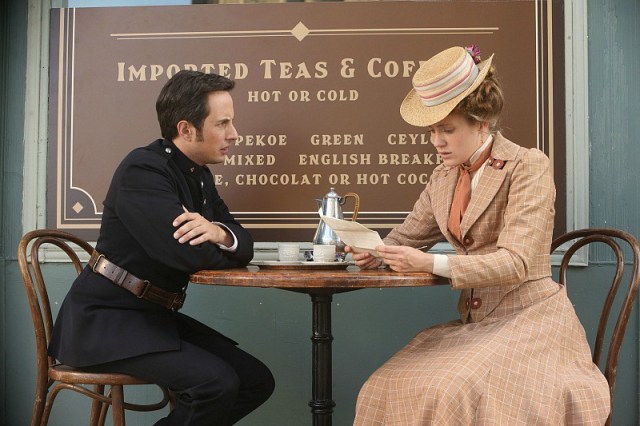 “It says here that The Hook is blogging about us again, George!  What have we done to deserve this?”

Here now are your thoughts on how MMX has unfolded so far.

@TheTerribleHook (1) We fans are spoiled – we've come to expect great episodes and S10 delivers. S10 also has what I think is the best….

@TheTerribleHook (3) … thing better than the current season, is the next season. MM consistently exceeds expectation year after year.

Speaking of dedicated Murdochians/fans and Twitter, this season did herald one disturbing change to the MM universe. At one time you could count on the Murdoch team to RT your comments and observations. At one time you could take comfort in the fact the MM team was closely monitoring the show’s Twitter account for witty, insightful comments which they were more than happy to respond to.

That time has passed.

I don’t know what has been transpiring behind-the-scenes at Murdoch’s production company, Shaftesbury, but someone there decided to cancel the onset fan day and move it to CBC HQ (which worked out well enough from what I can tell) and cut ties with fans virtually. Fortunately, MM showrunner Peter Mitchell and Co. have maintained a close relationship with fans.

No wonder I love those guys.

What’s that? You’d like a few more? Happy to oblige.

@TheTerribleHook Wish I hadn't missed so much but since MM has never let us down (in anyway) I am sure MMX was better than the last.

And to close out this MM lovefest…

@TheTerribleHook I love the show but I think the end is near. Things just seem to be getting neatly tied up.

Last but certainly not least, let’s hear from some folks with the inside track on all things Murdoch…

@TheTerribleHook Season 10 is truly a milestone for Canadian television. we shot our 150 th episode this season

“The Murdoch team was such a fantastic group to have gotten to work with. They were so warm and welcoming.”

He really is a great guy, isn’t he?

Three episodes remain, including one featuring MM’s version of real-life master of horror H.P. Lovecraft. Scary stuff indeed, kids. My thanks to everyone who participated in this Murdochian hoedown.

See you in the lobby and on the CBC, friends…

Husband. Father. Bellman. Author of The Bellman Chronicles. Reader of comic books and observer and chronicler of the human condition. And to my wife's eternal dismay, a mere mortal and non-vampire. I'm often told I look like your uncle, cousin, etc. If I wore a hat, I'd hang it on a hat rack in my home in Niagara Falls, Canada. You can call me The Hook, everyone else does.
View all posts by The Hook →
This entry was posted in Hotel Life and tagged CBC television, Daniel Maslany, MMX, Murdoch Mysteries, Peter Mitchell, Yannick Bisson. Bookmark the permalink.

18 Responses to The Hook On: Murdoch Mysteries Season Ten.