Let’s begin with a proverb that has endless variations, beginning in the 13th century, what do you say?

Let’s begin, shall we? Scratch that, I’m not asking, I’m telling.

For Want of a Nail

According to some eggheads I consulted this proverb “describes a situation in which a failure to anticipate or correct some initially small dysfunction leads by successively more critical stages to an egregious outcome.”

Yeah, I fell asleep halfway through the explanation too. WAKE UP!

For centuries now people have put their own spin on this little poetic ditty based on their own experiences and understanding of the basic message. Everyone from Benjamin Franklin to the writers of M*A*S*H to musicians and comic book writers have used For Want of a Nail to make a point.

None of us truly realize just how important we are to the fabric our own universe. Having my lovely bride in my life has helped me keep the horrors of my childhood memories at bay. My amazing daughter keeps my desire to dream alive. Meeting people from all over the world gives me hope that we’re not going to destroy ourselves some day, in spite of the best efforts of Justin Trudeau and Donald Trump, and a million other political morons.

I can’t imagine what would have happened if I hadn’t been placed at a Zellers department store for a high school internship, or if my wife and I hadn’t consulted a fertility doctor, or if I hadn’t gone to a job fair for a hotel chain where I’d meet a senior bellman named Louie who eventually directed me to the hotel I’ve been working at for twenty years now. Our lives are a series of dominoes in the form of choices and events involving people we encounter, most of whom are more vital to our existence than we’ll ever know.

Take a moment and think hard about your past. I’m willing to bet that you’ll see more than one instance where a seemingly-trivial event or meeting actually changed your life, hopefully for the better. I’m thankful for the nails in my life (like Ronnie, whose life and ultimate end inspired this path I’m trying to follow) and I hope I’ve been a worthy nail for others. 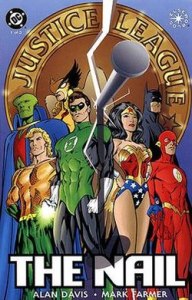 Husband. Father. Bellman. Author of The Bellman Chronicles. Reader of comic books and observer and chronicler of the human condition. And to my wife's eternal dismay, a mere mortal and non-vampire. I'm often told I look like your uncle, cousin, etc. If I wore a hat, I'd hang it on a hat rack in my home in Niagara Falls, Canada. You can call me The Hook, everyone else does.
View all posts by The Hook →
This entry was posted in Hotel Life and tagged 100 Reasons To Not Kill Yourself, Death, For Want of a Nail, JLA: The Nail, life, M*A*S*H, suicide, Zeller's. Bookmark the permalink.