It has charms to soothe a savage breast, or so I’ve been told. (I try to avoid savage breasts whenever possible.)

It’s been emitted from a car radio, a stereo, or even a store’s muzak system while many of us were conceived. (Don’t judge those whose parental units hooked up in a store’s change rooms; it happens.)

It can move us to tears or lift our spirits in a few notes or lyrics.

It’s been declared the “Devil’s creation” by one group while being referred to as the “cat’s pajamas” by another – as they groped each other in the spacious backseat of a Buick.

It speaks to us in various languages and a multitude of styles without actually speaking. The spoken word of William Shatner being the obvious exception, of course.

At the onset of mankind music began as a series of grunts combined with the rhythmic banging of a tree branch or a large bone on a simplistic drum (a large skull, perhaps?) and led to such early caveman hits like:

“The Wheel, What Is It Good For? (Seriously, Does Anyone Know?)”

“She’s Mine. (Because I Hit Her Over The Head With My Club.)”

What? You don’t know if I’m wrong. You weren’t there, were you?

In the beginning of his career John Lennon used music to achieve fame and fortune with “the lads from Liverpool” and then he began to truly ponder the lyrics he was writing and most importantly, their impact on the world around him. And so one of the greatest songs ever written, “Imagine”, came to life in an attempt to show us what the world could be… If only we were willing to unleash our minds.

Protest songs. Love ballads. Symphonies (that stir the depths of your soul). Musical theater creations. War declarations. Music can be used for any purpose the aforementioned imagination can conceive.

Music has been described as an art form and cultural activity whose medium is sound organized in time, but it means something different to each of us. Rockin’ Ronnie lived to perform onstage, his bass cradled lovingly in his weathered hands, his devotion to his band mates immeasurable, his sheer joy at being there uplifting to behold.

But while we played his favorite tunes at his funeral, Ronnie’s song has ended.

A song never really ends; it can be replayed forever.

Every day I walk to work shrouded in darkness, the music from my phone my only companion. Ronnie lives on in the songs I listen to as I make my way across the empty streets of Niagara. I picture his smile. His signature, “Yeah, yeah, yeah” accompanies the sounds in my ears. Sometimes I cry. Sometimes I laugh and smile. (The laughter scares skunks and stray cats and keeps them off my path so it actually serves a valuable purpose.) But I’m always moved by the music. 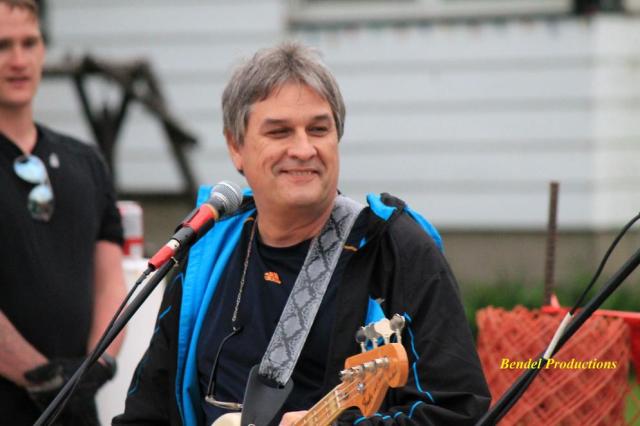 One could use a billion words and never do music justice. Just do me a favor and think back to some of the most significant days of your life and try to remember the music playing in the background as you spoke vows, welcomed your child into the world or said goodbye to a loved one for the last time. Even if it’s the cacophony of sounds from the city or just your home, music is everywhere and it’s certainly worth living for.

See you in the lobby, friends and music lovers…

Husband. Father. Bellman. Author of The Bellman Chronicles. Reader of comic books and observer and chronicler of the human condition. And to my wife's eternal dismay, a mere mortal and non-vampire. I'm often told I look like your uncle, cousin, etc. If I wore a hat, I'd hang it on a hat rack in my home in Niagara Falls, Canada. You can call me The Hook, everyone else does.
View all posts by The Hook →
This entry was posted in Hotel Life and tagged 100 Reasons To Not Kill Yourself, Buick, Death, life, music, suicide, William Shatner. Bookmark the permalink.