The Hook Did New York – And They Declared A State Of Emergency.

But I had nothing to do with it, I swear.

Nevertheless, I was there at the same time as “Snowmageddon 2018”, so I’m sure I’ll the history books will blame me.

My mind is in a strange place these days. (I know what you’re thinking: “You mean you consider yourself normal the rest of the time, Hook?”) So please, bear with me.

My latest Big Apple adventure began on Tuesday when we received an e-mail that made my daughter’s heart sink into her designer socks. Mother Nature’s “fury” had prompted Air Canada to cancel both our flights to and from New York, thus derailing our second one-day excursion south of the border. Suddenly my child’s plans for experiencing the intense beauty that is Dear Evan Hansen appeared to be down the tubes.

Then my wife managed to get through to an actual Air Canada booking agent as I was still navigating their labyrinth of a website. Every flight had been canceled for the day of our departure but twenty minutes later, our one-day trip became a three day adventure.

Then the fun began.

And by “fun” I mean a whirlwind of human misadventure.

My daughter went from zero to one thousand when my wife ran downstairs and told her to start packing, which if you’re female or know one, means all heck broke loose as she attempted to wash her hair, do her make-up and pack for two days in an hour.

Bu then the sixty minutes became twenty when the car service we had arranged for 4:30 am told me they could pick us up at 3:30 pm instead. Then we had to really scramble like a short-order chef at a truck stop.

Yes, I paint with words, what of it?

The next step was to get back to that plastic portal to the world I call a computer and arrange for lodging. Seconds later I found a room that was dirt cheap ($45 a night for a two-room suite through the hotel’s travel program, which meant I wouldn’t keep my kid awake all night with my snoring like I did last time) and that was perfect in every way – with one minor exception.

With that, I grabbed some clothes, kissed the wife and left her alone in the house with two construction workers (I’m happy to report that our basement will no longer look like the last act of Titanic when Niagara experiences a heavy rain or spring thaw) and hopped in a Towne car bound for Toronto’s Pearson International Airport.

And then we were flying higher than a supermodel in the Eighties! 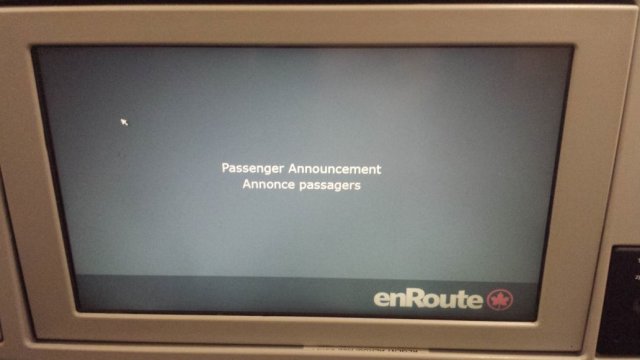 Some may disagree, but Air Canada rocks, kids.

An evening flight got us to New York one night before the raging snowstorm they were anticipating. Normally I’d take NY Transit to the Port Authority from the airport and then a bus from there, which, and I cannot stress this enough, IS YOUR BEST VALUE, kids. Doubting me, Thomas? Look at the facts:

But beggars can’t be choosers at ten o’clock at night in NYC, friends.

But our cabbie was awesome, East Indian, and full of cool conversation

CABBIE: (While driving through the Lincoln Tunnel.) Very scary here sometimes! One time I follow the… orange thingies here…

CABBIE:  Yes! Those things! I follow them… and someone turn them around, so I end up back the same way I go!

I highly recommend a drive through New York at night. Thirty minutes later we arrived at Embassy Suites by Hilton Secaucus Meadowlands and I fell in love with this throwback to a simpler time. 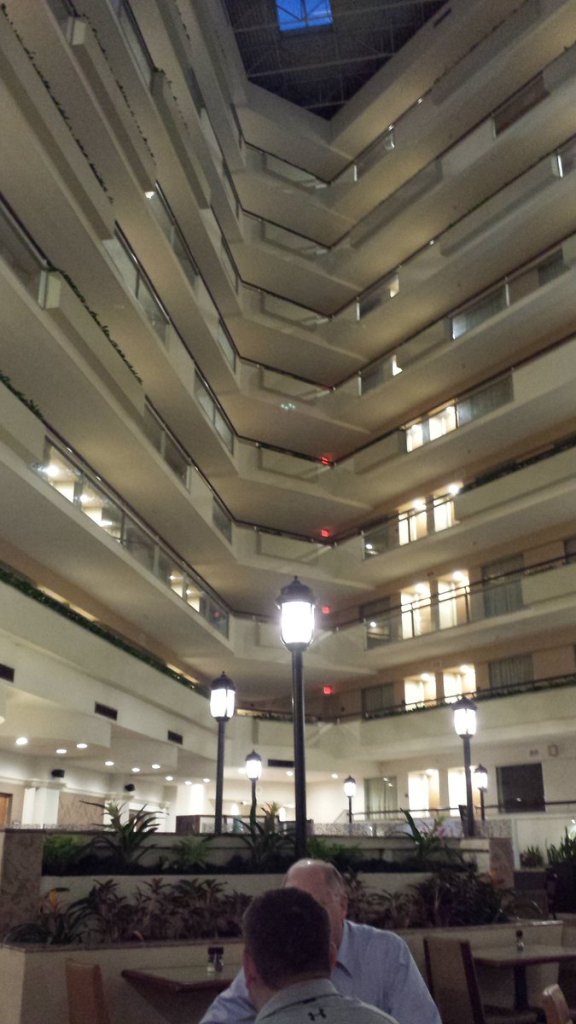 I have no idea who these corporate drones are, so make up a cool backstory of your own.

In the interest of time and the fact my head still hasn’t cleared up, I’m going to encapsulate the rest of my tale in pics and my patent-pending commentary. We set out to Times Square, Broadway, and all parts in-between on Wednesday morning after using NJ Transit (it rocks and you won’t get shot!) and our trip truly kicked into high gear.

This is what a state of emergency looks like in NYC and NJ. Giant, super-wet flakes and the possibility of a more powerful storm – that never actually arrives.

While the snow didn’t accumulate, it was wet as hell. (I so want to make a very adult joke here, but I’m not going to.) A quick trip to a cavernous souvenir shop remedied the face we didn.t bring any winter gear with us. We met many residents of New York of New Jersey, none of whom threatened to shank us or steal our kidneys. Here are a few…

The Port Authority morning horde (and military security on the left), meet my readers. Readers, meet the PA morning horde.

Even the birds that make NYC their home have attitude. I loved it. 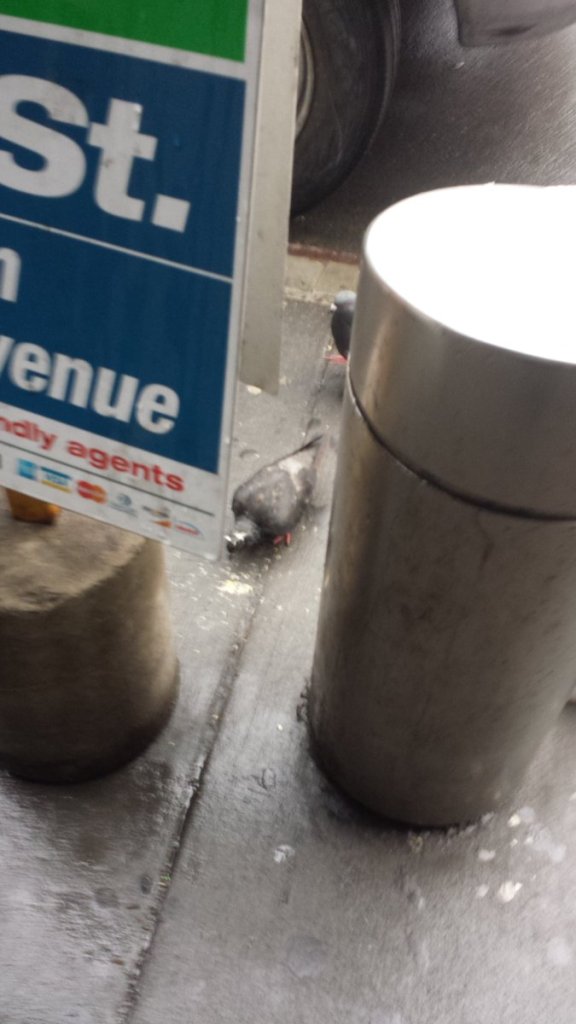 I can’t be certain, but I’m pretty sure one or both of these pigeons were packing; I saw NRA pins…

No trip to Broadway would have been complete without a visit to Schmackary’s, the ultimate cookie joint, where dozens of Broadway stars hang out – and eat cookies, obviously. We didn’t spot any, but we did meet some ladies who were going to the same same show as us.

So we sat there and ate giant cookies and drank some delicious American milk. Fun fact: US milk in glass bottles is a million times better than Canadian milk in plastic bags.

Our cows really have to step up their game.

From there we headed to the Happiest Place On Earth. Sort of. The Times Square Disney store is a subsidiary of the aforementioned HPOE (t almost spells hope!) and I must caution you: if you have small children… and a credit card… STAY AWAY FROM THE DISNEY STORE! It’ll break you, man. 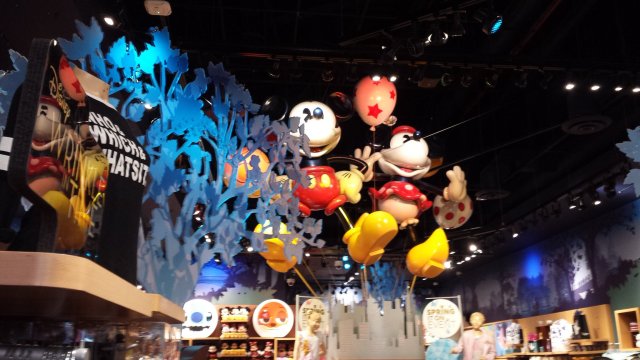 Finally, the moment my kid had been waiting for arrived at the Music Box Theatre, took our seats and waited for Dear Evan Hansen to begin. If your unfamiliar with this production, here’s a quick synopsis: Evan Hansen is a high school senior who suffers from social anxiety disorder, which makes him as twitchy as a long-tailed cat in a room full of rocking chairs. After the suicide of one of his classmates, he gets drawn into a lie that inadvertently brings him closer to the classmate’s family, while also allowing him to gain his own sense of purpose.

The opening set-piece of Dear Evan Hansen. This show will move you in ways you’ll never imagine.

In other words, this musical hit home for me. And I mean it hit me hard. I teared up after the second song (“Waving Through A Window”), but by the last piece to preceded the intermission (“You Will Be Found”), my resolve broke.

Something in the song made me realize that Rockin’ Ronnie only wanted to come home, but, for reasons that are best unsaid, he had to have been convinced that was impossible. The tears flowed as freely as the snow outside, but I persevered. Dear Evan Hansen ended an hour later and that brings us to the last part of my journey worth mentioning.

Tales of brusque New Yorkers with violent tempers are legendary but we’ve never encountered any in our two previous excursions there. That changed when a couple that was sitting beside my daughter threatened to sic the usher on her. They saw her phone on her lap and apparently they were convinced she was recording the show. This is actually a common practice; Sarah likes to take pics before the show and immediately after the last song, when the cast addresses the audience. Both prctises are allowed but this couple wouldn’t relent.

The show resumed as I was about to confront these idiots so I held back, but as we were waiting at the stage door my blood began to boil. Which was ironic considering we were soaked from snowflakes the size of a small car. And so I left my daughter standing at the barricades surrounding the stage door, surrounded by strangers and I followed two morons down the street to confront them.

I didn’t have a plan. I didn’t have a clue what I was going to say. And considering the male was built and far younger than me, I most likely didn’t have a chance. Nevertheless, I confronted them both, questioning why they’d threaten a child, my child.

They were walking with a crowd that immediately stopped moving to watch this lanky, crazed tourist in a FDNY toque scream at the couple who looked like deer in headlights.

“Well, we thought she was recording the show,” was his excuse, “that’s not right!”

“What are you, the Broadway police? Who cares what she’s doing? Mind your own business!”

The male moved to attack but his companion blocked his way and apologized. “We’re so sorry to have upset your daughter.” was all she could offer.

“You’re sorry… he’s a fucking dick!” was all I could counter-offer.

The (snow-bound) Canadian gangster look was the only weapon in my arsenal.

With that, I walked away, hopeful that he wouldn’t jump me from behind, forcing me to resort to my only plan of attack/defense: throwing him into the street where he’d hopefully get hit by a cab.

Yes, that was my plan. Make of it what you will.

The “storm” had shut down the city’s transit system so I spent roughly a half an hour and a hundred bucks ($50 flat rate plus tolls and tip, naturally) negotiating with a horde of cabbies to get us back to the hotel but it was worth it.

Our ride out of Jersey and back to the Great White North. The irony was inescapable: we left Canada, which had no snow, to come to New York, which was soon covered in the stuff.

And that’s my story, friends. Thanks for sticking with me for this unusually-long post.

Husband. Father. Bellman. Author of The Bellman Chronicles. Reader of comic books and observer and chronicler of the human condition. And to my wife's eternal dismay, a mere mortal and non-vampire. I'm often told I look like your uncle, cousin, etc. If I wore a hat, I'd hang it on a hat rack in my home in Niagara Falls, Canada. You can call me The Hook, everyone else does.
View all posts by The Hook →
This entry was posted in Hotel Life and tagged Air Canada, Dear Evan Hansen, Disney store Times Square, Embassy Suites by Hilton Secaucus Meadowlands, New Jersey, New York, New York city, NJ, NYC, The Hook, Times Square, travel. Bookmark the permalink.

46 Responses to The Hook Did New York – And They Declared A State Of Emergency.