The Hook’s Top One Hundred: Part One.

So the other day I was escorting a yuppie (sorry, but they weren’t all exterminated in the Nineties, kids) corporate drone into the hotel and as I wheeled his packed-to-capacity-and-beyond cart of foam blocks, printers, posters and easels through the lobby we quite literally ran into a rather excitable young lady and her boyfriend as they were making their way to the Front Desk to look for some scissors to remove the zip ties he had used to fasten her wrists together.

“I can’t believe I let you talk me into this, Chip!” she exclaimed, venom dripping from her ruby red lips with every syllable.

We kept walking. Well, I kept walking, the yuppie just stood there, lost in the shock and awe of the moment.

“Stick around this city long enough and that’ll seem normal, sir,” I reassured him as I tapped him on the arm, “Trust me, Niagara is much more than tourist traps and chain restaurants. Plus, that’s what she gets for trusting a guy named Chip with zip ties.”

“But that doesn’t phase you?” he inquired. “I mean, I know you must see all kinds… but seriously?”

“Sir, that doesn’t even crack my top one hundred.” I deadpanned.

He let it go, but it did get me thinking: After twenty years in the hospitality trenches, what has cracked my top one hundred?

I’m so glad I asked.The following list is comprised of guests that were naughty and nice, sweet and sour, and good and bad, all in their own way. I know you all have cat videos to watch on YouTube, so here’s my top twenty-five for starters.

1)  The Krysten Ritter lookalike hooker who strolled out of the hotel last Sunday who hiked her barely-there skirt up her hip to reveal a, “THIS SPACE FOR RENT” tattoo. Why it wasn’t on her butt, I’ll never know.

Hookers love being featured on my blog, can you tell?

2)  The Return Guest (someone who stays at the hotel frequently) who dropped off a picture (this was before e-mail or text was used regularly, kids) of herself to one of my fellow bellmen; the pic in question displayed the young lady placing her fist somewhere it should never go.

He was turned on. I was in therapy for a year.

3)  An American pastor who used to check in and promptly order himself a hooker who looked under-age. He did this every time for a year before he just stopped showing up. Maybe the law – or a Higher Power – caught up with him?

5)  The family that brought their dead frozen feline into the hotel in a Coleman cooler. Which slipped off the cart (in my defense, they loaded it) and popped it’s lid, sending the cool cat sailing across the just-polished marble floor.

6)  RCMP recruiters who were so tough on the police officers who turned up at the Mountie recruiting drive cry like little girls. Honestly, there was more than one seasoned officer who stumbled out of that meeting room with tears in their eyes.

7)  DJ Jazzy Jeff.  Yes, the guy Will Smith left behind when his movie career exploded. I can’t say much without violating guest confidentiality (then again, I’m not an MD or lawyer) but let me say this: Smith made the right decision.

8)  OJ Simpson.  The Juice tipped me large and may or may not have uttered the greatest line in guest history to some kids who were too nervous to come out of their room and meet him, “It’s okay, kids… I won’t kill you.”

9)  A certain pop star who had just reconciled with her significant other; the entire staff was forbidden from acknowledging her presence, for fear of making her spouse feel overshadowed. At the time I felt it was a ridiculous rule but in retrospect… I still do.

10)  Air Supply. They’re the most low key duo in pop music history. That may not seem like a characteristic worthy of inclusion here, but compared to some celebrity guests I’ve encountered, it’s downright otherworldly.

11)  Shantelle Bisson and her husband.  (I believe he plays a certain TV detective.) They’re accessible. They’re fun. They’ve both been a major presence on my blog and Twitter account. What else is there to say?

12)  Silent Bob. Kevin Smith recently suffered a major heart attack. It would’ve been an immeasurable loss if we lost him; hyperbole aside, he’s one of the nicest mammals I’ve ever met anywhere. 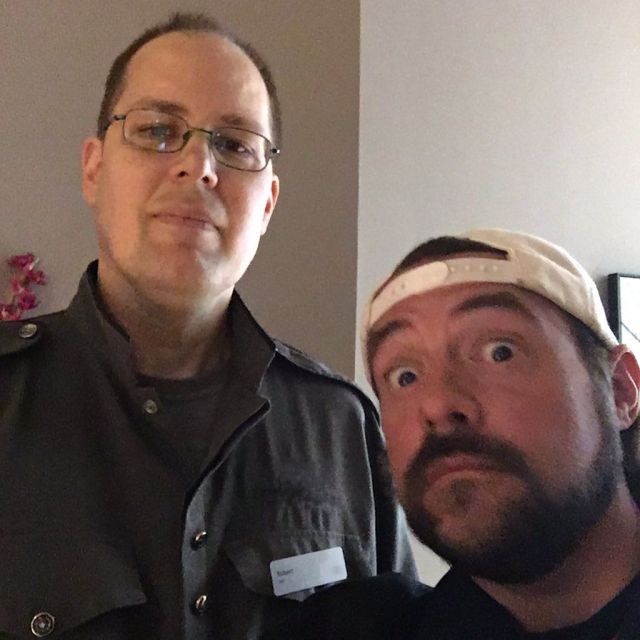 I really have to adopt Smith’s “photo face”.  It beats smiling any day.

13)  Thomas Craig.  He’s Inspector Thomas Brackenreid on CBC television’s Murdoch Mysteries and I almost ran him over with a luggage cart. Twice. He’s a Brit, so he would’ve given me a jolly good throttling…

14)  Sorority sisters who vomit on each other in the lobby. Yes, there’s been more than one.

15)  Sorority sisters who run to their car to vomit… only to realize, afterwards, that they’re in the wrong car. Yes, that’s also happened more than once.

16)  Sorority sisters who run into walls, trip over suitcases, and generally wipe out due to a heightened state of inebriation.

17)  The sorority sister who not only vomited in the lobby, she vomited on a small child. I know it was wrong, but I laughed. Hard.

18)  The sorority sister whose sisters brought her to the lobby in an LCBO (that’s a Canadian, located in the province of Ontario, liquor store) shopping cart during a frenzied Sunday check-out rush. She was effed up but it was glorious.

19)  The cougar who I had to get stern with in the room who later told me, “Talk to your wife or girlfriend like that tonight and she’ll do anything you want.”

I have a special rapport with cougars.

20)  Honeymooners from Boston who checked in on Friday, got married on Saturday and left in handcuffs (back when cops were actually using them instead of zip ties) and in separate police cars on Sunday. Ain’t love grand?

21)  While delivering the bills early one morning I strolled past a room where some sexy shenanigans were taking place. (Thank heavens for cheap hotel room doors.)

I felt so bad for the poor, poor bastard I was almost inclined to walk away. Almost.

22)  The unbelievably-cheap Parisian goofball who, after realizing the hotel was full-service, stole a housekeeper’s cart and brought his luggage through the lobby and past hundreds of guests, on it. The only silver lining to this tale? His wife and kids were so mortified they pretty much disowned the scumbag.

23)  A rouge pharmacist (she shut her pharmacy down but kept bringing in product – which she sold under the table to a stable of clients) and her brother, a John Lennon lookalike with a penchant for setting up model railways in the room. They were great tippers. Until the long arm of the law caught up with them.

Then they got a prescription for some jail time.

24)  The gentleman who called down to the Bell Desk raving:

HIM:  I called down two hours ago for my bags to be picked up!

ME:  I’m sorry, sir, I’ve been here all morning, we must be experience trouble with out phones…

HIM:  Yeah, that happens to me all the time! Must be dimensional portals intercepting the phone signals!

HIM:  I hate when that happens!

25)  That dishwasher who smashed the punch clock at the beginning of what turned out to be his last – and shortest shift – ever. I salute you, sir.

I think that’s enough for now, don’t you? Enjoy your weekend, everyone.

Husband. Father. Bellman. Author of The Bellman Chronicles. Reader of comic books and observer and chronicler of the human condition. And to my wife's eternal dismay, a mere mortal and non-vampire. I'm often told I look like your uncle, cousin, etc. If I wore a hat, I'd hang it on a hat rack in my home in Niagara Falls, Canada. You can call me The Hook, everyone else does.
View all posts by The Hook →
This entry was posted in Hotel Life and tagged Air Supply, hotels, Kevin Smith, Murdoch Mysteries, Niagara Falls, O.J. Simpson, The Hook, travel. Bookmark the permalink.

23 Responses to The Hook’s Top One Hundred: Part One.