An Open Letter To The Cast Of Anastasia on Broadway.

It’s been said that Broadway is a place where dreams are born, but I have to disagree.

Having walked the hollowed sidewalks of this magical place on two occasions now, I believe Broadway is a place where dreams are shared, and each time those dreams grow even more glorious and complex. 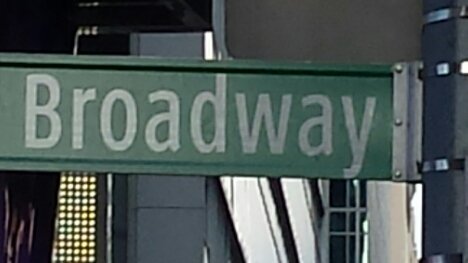 A simple street sign with immeasurable power over millions of dreamers.

On Wednesday, August the thirtieth I arose from my far-too-brief slumber to hop in a limousine (yes, one can actually hop into a limousine, just watch you head) with my daughter and as we made our way through the dark Canadian night of Niagara Falls to the Toronto airport to board a plane bound for New Jersey’s Newark airport (insert Jersey joke here) I had to ask myself:

“Why in the world did I drag myself out of bed after working a crazy shift the night before just to visit Broadway for one day? Am I nuts?”

Oh, did I mention my daughter and I were flying into Newark at ten in the morning, hitting Times Square/Broadway for the day and then flying back to Canada at nine in the evening?

At this point you’re either thinking one of two things: One) “You really are nuts, Hook!” or Two) “Aw, you’re such a great dad, Hook!”

Incidentally, both thoughts are perfectly acceptable and valid.

The truth is, my daughter has been mercilessly bullied, ignored, marginalized and made to feel she has no friends for most of her eighteen years on this planet. She suffers from a medical condition called interstitial cystitis that only affects 2% of females under the age of forty and spends most of her nights sitting up in bed waiting for her pain to subside so she can get some sleep. In the meantime she she surfs the interweb and reads about one thing and one thing only…

Broadway, baby. It’s all about Broadway. Sarah’s world revolves around the glorious dreams that unfold on various stage at Broadway’s theatres.

And that, my friends, is why I sacrificed precious hours of sleep to stand in various lines at two airports in two countries before standing in a final line outside the Broadhurst Theatre. Needless to say, my daughter didn’t stand in any lines… she floated above them.

No, my child isn’t a witch, she was just metaphorically floating on air. Canadians are weird, but we’re not that weird.

It should also be noted that Sarah has become a strong, independent young woman with a gifted for the written word. Indeed, my daughter has become the sort of scribe I wish to emulate if and when I ever grow up. I’d be proud to know Sarah even if she wasn’t my child. 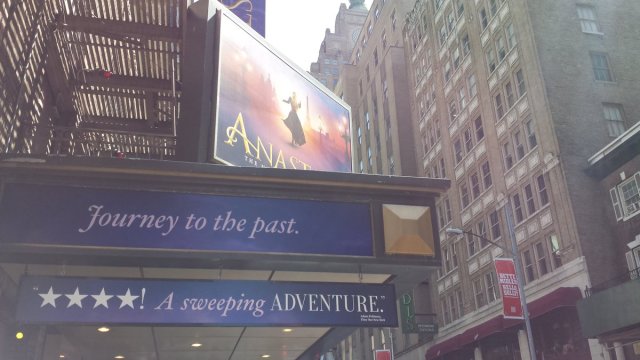 Ironically, Sarah’s elation reached a fever pitch before the curtain rose on that afternoon’s matinee of Anastasia. A form brushed past her back as we stood in line and a voice rang out, “Excuse me.” This figure, unknown to virtually every theatergoer save for my child entered the Broadhurst through the stage door and disappeared immediately. Sarah began to tremble and struggled to form a coherent thought, to say nothing of uttering a single sentence.

“Did you see… that was… I can’t believe… that was (voice lowering) John Bolton!”

And so it began.

We made our way into the Broadhurst, purchased a programme, took our seats and soaked in the atmosphere. It’s difficult to describe the energy one feels before a dream comes to life but luckily that power still resonates in Sarah’s eyes and so I can spend the rest of my life trying. 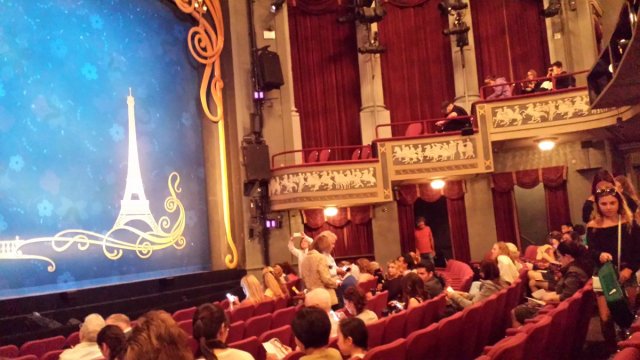 It would take a more adept scribe than myself to do justice to the performances of John Bolton, Derek Klena and company but I will say this: every cast member of Anastasia, from a seemingly-inconspicuous Royal guard to an expat Russian aristocrat drinking their sorrows away in Paris gives 110%. They believe in every note. They open their heart with every gesture. And the audience can feel it and truly is a part of the journey.

Not to play favorites, but I cannot say enough about Anya/Anastasia herself, Christy Altomare. In my daughter’s own words:

“She struggled for years just to get noticed but she never gave up!  She’s one of us and you can see it in every performance!  I hope she never realizes how good she is!”

The same can be said for every cast member; none of them appear to realize just how blessed they are to be the messengers of such a beautiful dream. Anastasia is about the enduring bonds of family, bonds that can survive any act of violence regardless of how horrific they may be. Anastasia is about the often conflicting love for one’s country and above all, it is about the struggle to recognize and accept one’s identity.

Heady issues for a “simple musical” it’s true, but Anastasia speaks to every soul who is fortunate enough to see it. Love. Honor. Sacrifice. Even some of the most hilarious onstage kissing you’ve ever seen, all of these factor into the journey that is Anastasia. And the production values? Well, they’re a cut above, kids.

From the moment you sit down you’re wowed by a curtain that features projected snow cascading across its surface.

(My kid’s going to kill me for that but it was totally worth it.) 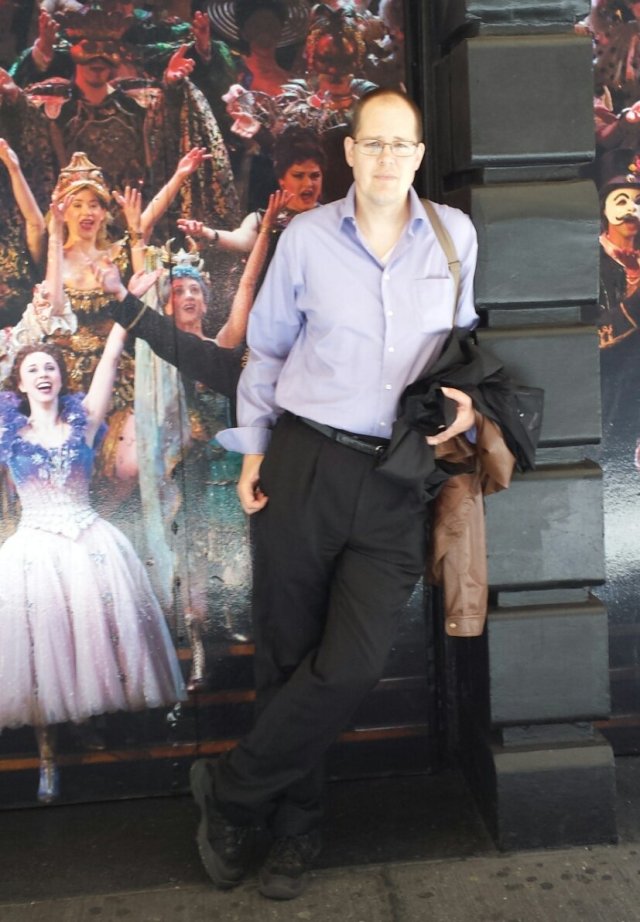 My Broadway moment.  And not coincidentally, the exact moment all the lights exploded…

But back to the production values: A monolithic screen sits behind the actors and transforms you from a doomed St. Petersburg ballroom to a European railway to a Parisian street instantaneously. The behind-the-scenes artists of Anastasia are the true unsung heroes of Broadway. And speaking of unsung heroes…

There was a slight casting issue that gave Sarah cause for concern. The “regular” Gleb, Ramin Karimloo, didn’t appear at our performance, a fact that did not go over well at first. “He’s Canadian! How often does one of us get to be here?” However, when Ramin’s “replacement”, Wes Hart, took the stage… he did not win her over.

But by his second performance she was hooked, pardon the pun.

Indeed, I found myself completely overwhelmed by Anastasia. I recently lost a dear friend to suicide and so I was apprehensive about watching an entire family, fictional or not, be wiped from existence.

But Anastasia captured my heart and left me with a deeper appreciation for my daughter’s dreams and passions. And for that, my new friends, I thank you all. “We’re headed for the big time… The Hook’s blog!”

One more thing, as the curtain rose and we made our way back to the New York crowds the next phase of our journey began. Waiting for autographs and pics by the stage door is a Broadway tradition, one that Sarah discovered when we saw Hamilton in April. We were honored to take part in that tradition once more, especially when we realized all of Anastasia’s principles would be joining us.

Sarah was too starstruck to articulate her feelings to Mary Beth Peil, John Bolton, Derek Klena, Nicole Scimeca and company, but she found the courage to tell Christy Altomare that she was “the best Anya they could have ever found”.

In closing, Anastasiacs (I just made that up!) I can never thank you enough for lighting a fire in my daughter’s memory that time will never be able to extinguish. My daughter and I now have two Broadway shows under our belt (Hamilton in April was more than Sarah could ever have imagined and so Anastasia was an unbelievable bonus) and with any luck we’ll be able to sell some more organs (not our own of course) and make our way back to New York from Niagara Falls again soon.

See you in the lobby and on the web, friends…

Husband. Father. Bellman. Author of The Bellman Chronicles. Reader of comic books and observer and chronicler of the human condition. And to my wife's eternal dismay, a mere mortal and non-vampire. I'm often told I look like your uncle, cousin, etc. If I wore a hat, I'd hang it on a hat rack in my home in Niagara Falls, Canada. You can call me The Hook, everyone else does.
View all posts by The Hook →
This entry was posted in Hotel Life and tagged Anastasia, Anastasia Broadway, Canada, Christy Altomare, Derek Klena, dreams, John Bolton, New York, New York city, Times Square. Bookmark the permalink.

28 Responses to An Open Letter To The Cast Of Anastasia on Broadway.