5×5 With The Hook: Sarah Sharratt.

Sarah Sharratt is a world-class cook, mom and an unexpected expat who resides in a breathtaking village in rural France, is at the center of a Canadian television production that only airs in the United States and Australia – and is now starring in her own 5×5 on my blog.

So she’s got a lot goin’ on for one gifted – and ridiculously-beautiful – human being, wouldn’t you agree? (Don’t be upset with me feminists; I stressed the “gifted” part first, but I refuse to ever apologize for paying a gorgeous woman a compliment.)

And for the record, I think her logo blows mine away.

But back to today’s guest: After graduating with a diploma in Cuisine from Le Cordon Bleu in London England, Sarah worked as a food stylist for food television shows in England before relocating to rural France in 2014 when Fate stepped. (Fate sends Sarah and her family to France and sends me to… nowhere but into the path of irate/zany guests. Fate sucks sometimes.) They had previously been living in a city in the south of Switzerland.

Yes, Sarah is one of those people who seems to have been touched by the hand of the All-Mighty, it’s true. But I’m sure she has a dysfunction or two hidden away somewhere. I know one of her hopes is to break into the Canadian television market:

“We hope to make it to Canadian television in 2017. You’d think it would be easier given it is a 100% Canadian production, but apparently not. Fingers crossed for 2017!”

At any rate, now Sarah lives in the countryside in the southwest of France where she wrangles 2 children, 9 chickens, 3 Bernese mountain dogs and 3 fish. And possibly a partridge in a pear tree.

Her show, UpRooted with Sarah Sharratt, airs on Cooking Channel US and is billed as Sarah Sharratt: My Life in France on Lifestyle Food, Foxtel Australia.

My show, The Bellman Chronicles, airs… nowhere. Because it doesn’t exist. Apparently they only give shows to fascinating, talented people these days. TV, man…

As for Sarah, even a cursory glance of her cyber-home reveals a personality who redefines what it means to be a mother, wife, TV host, expat and a million other labels. Plus, it’s just plain fun. UpRooted taps into the fascination we all have with the struggle to fit into other cultures while maintaining one’s own cultural identity.

But enough of my virtual jawing, take it away, Sarah!

ONE)  As a former food stylist do you find yourself fighting the urge to redo others’ plates while dining at a restaurant? “Sorry, but this is all wrong, the broccoli clashes with the red potatoes…”

I prefer the understated side glance and eyebrow raise as opposed to flinging myself across the table to garnish a lackluster-looking dish.

I really do think presentation is important, though – it’s a well-kept culinary secret that most recipes have already been done a thousand times over. How you choose to style and present your food is how you make your recipes stand out in a world chock-full of roasted chicken and kale salad.

TWO)  As an unexpected expat who’s been all over this world (England, France, Switzerland) do you have a particularly-memorable travel tale to share?  (As a blogging bellman I’m fascinated by travel stories.)

Just recently I was in Rocamadour, a medieval cliff-top village that overlooks the Dordogne Valley. It is absolutely breathtaking. We were filming an episode for my show, UpRooted. We stopped to do some filming in the town center before heading to a farm that produces the famous Rocamadour goat cheese. Many legends surround this town, including some that claim it is a place where miracles happen. As a result, the site is a popular destination for pilgrims traveling through Europe.

The most devoted of these pilgrims climb the 216 steps to the chapel on their knees, stopping to say a prayer on each step. Naturally, there are not many people who do this, but on the day we visited we saw a group of about 50 people climbing the steps on their knees and praying. It was quite a sight to behold; a serendipitous moment – which are always the best when you are traveling. 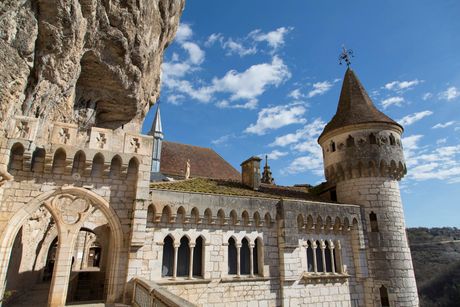 THREE)  You’re a mom and a world-class cook; does this mean your kids have hit the food jackpot or do they prefer “kid food” like sugary snacks and fast food? (Though I do realize you live in the countryside of southwest France and therefore they may not be anywhere near a Burger King.)

The kids are starting to come around on trying new foods. I totally credit this to living in France and not at all to my cooking. School lunches in France regularly consist of pâté de campagne, boeuf bourguignon, mussels, and beetroot salad… and kids eat it!

When my son was seven he had a new French friend over for dinner and a sleepover. Knowing that my broken French might seem weird to the little boy, I decided that dinner would be kid friendly. I decided on pizza and homemade chocolate chip cookies. About fifteen minutes into the meal the friend started to cry. He didn’t like the pizza and wanted to go home. I thought perhaps it was time to fast forward to dessert (who doesn’t like homemade choc chip cookies?). After a couple of bites, he handed it back to me and said he didn’t like it and still wanted to go home. Dinner was a disaster and the sleepover was aborted.

When the mom arrived, I let her know that he hadn’t eaten much pizza. I was told that he doesn’t really like pizza…mussels are his favorite food. I realized then that I had never had a chance!

(Wow. That kid’s in for a rough ride if he ever visits Niagara Falls, Canada.)

FOUR)  My wife often laments my lack of culinary skills. (I eat like a champ though.) Can you give me a single tip to improve my pathetic standing in the kitchen before my wife starts whipping pans at me?

How about surprising her with a delicious (and I’ll say it again) gorgeously presented cocktail while she waits for you to finish cooking?  My current favorite is my apple delight cocktail (http://sarahsharratt.com/recipe/apple-delight/).  I bet a good cocktail will ensure you hear fewer complaints about the quality of whatever it is you end up serving! 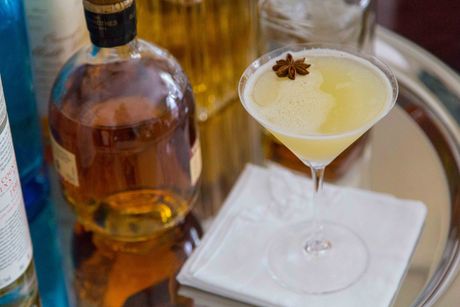 On a more serious note, these days I find there are a lot of cooks in the kitchen. The internet has a ton of versions of just about any recipe. For me, success in the kitchen is about working with ingredients you are comfortable with and that you love eating. Keeping it simple but doing it well scores way more points for me than something super complicated.

A special drink, good conversation, some background music…this is what will help make a good meal for your wife.

(I told you Sarah was awesome, didn’t I?)

FIVE)  You appear to be living a dream existence (though an unexpected one) but we all have dreams/fantasies. If you could be anyone else – fictional or real – for one day, who would you be for twenty-four hours, Sarah Sharratt?

Marie Antoinette – those dresses, that food, the castle… I know it caught up with her in the end, but she really knew the meaning of carpe diem. Plus, she was a fellow expat living in France and she really embraced the culture.

So as long as the 24 hours aren’t the ones where she’s stuck in prison awaiting the guillotine, I’d pick her.

And that’s all the time/space we have for today, friends. I hope this culinary 5×5 has left you satisfied but not bloated. My thanks to Sarah Sharratt for being so gracious and generous. And of course, thank you for being here, gentle readers.

Husband. Father. Bellman. Author of The Bellman Chronicles. Reader of comic books and observer and chronicler of the human condition. And to my wife's eternal dismay, a mere mortal and non-vampire. I'm often told I look like your uncle, cousin, etc. If I wore a hat, I'd hang it on a hat rack in my home in Niagara Falls, Canada. You can call me The Hook, everyone else does.
View all posts by The Hook →
This entry was posted in Hotel Life and tagged 5x5 With The Hook, Cooking Channel US, food, foodies, Sarah Sharratt, Sarah Sharratt: My Life in France, The Bellman Chronicles, UpRooted with Sarah Sharratt. Bookmark the permalink.

14 Responses to 5×5 With The Hook: Sarah Sharratt.