5×5 With The Hook: Michelle Ricci.

I’m a hack writer and always will be – but Murdoch Mysteries co-executive producer and super scribe, Michelle Ricci gives me hope with her positive energy, her writer’s journey and of course, her spectacular MM scripts.

Once upon a long ago this great Canadian was living in Los Angeles when, ironically, she discovered a little Canadian show called Murdoch Mysteries. Her creative juices began to flow and she headed back home, she enrolled in the Canadian Film Centre‘s Prime Time TV Program (an exclusive, very selective program) and while there she crossed paths with a mammal named Peter Mitchell. Perhaps you’ve heard of him, my fellow Murdochians?

At any rate, the rest is TV history.

Michelle is responsible for some of Murdoch’s greatest, sexiest, most boundary-shattering moments and for that we should all be eternally grateful. As for her journey to MM, well Michelle would have a place in this nerd’s heart even if she never worked for the CBC at all; you see, this young lady cut her TV teeth on one of the first shows to bring comic books to mainstream television in a big way… Smallville.

Smallville changed everything when it came to convincing television viewers to take super heroes seriously. If it wasn’t for this show we wouldn’t have the Arrowverse and nerds like me wouldn’t be able to complain about continuity and other minute details after every episode. So thank you for that, Michelle.

“In my defense, I honestly thought ‘The Hook’s Blog’ was a fishing website.”

Of course, Michelle Ricci is a humble lass who will tell you that she’s simply been a part of a team on every project she’s ever worked on, but the truth is she’s a gifted scribe whose work has affected viewer’s lives in ways she’ll never know. You’ll just have to take my word for it, Michelle.

One more thing, folks. Michelle is also co-responsible for Investigating Murdoch Mysteries: The Official Companion to the Series. This tome, written by Ricci and Mir Bahmanyar, and with a forward by Maureen Jennings, is a must-read for every Murdochian and anyone with money burning a hole in their pocket. I’ve pretty much wore my copy out and I haven’t had it that long. Chock full of behind-the-scenes tidbits, revelations and nuggets of info, this book takes the mystery out of Murdoch Mysteries while making you love the show even more. 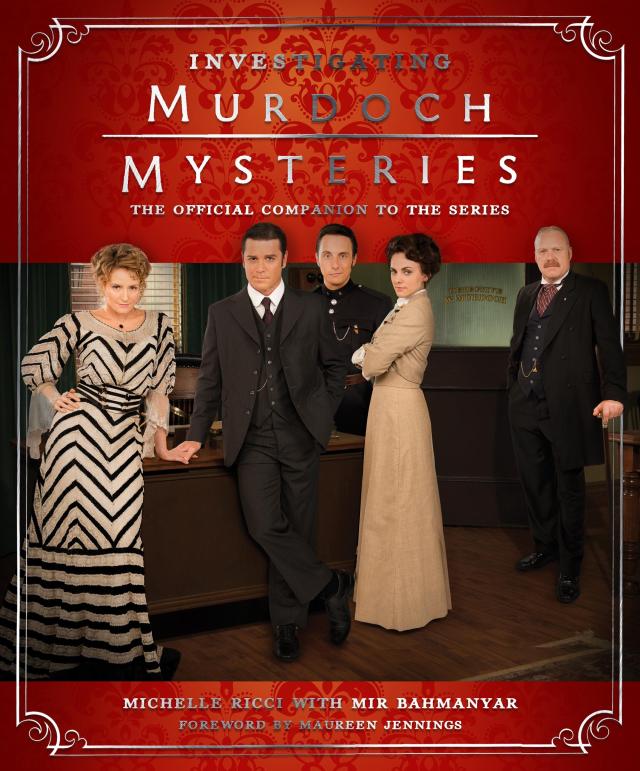 This beats the hell out of ties, socks, or cookware for Christmas, kids…

And now, friends, it’s time to hear from the lady herself. Take it away, Michelle!

ONE)  I’m impressed by your time on Smallville, Michelle. (I’m an unapologetic mega-nerd.) Care to share a brief fun tale from the set?

That show was a lot of fun to work on because we always got to be close to the action. I was a PA (Production Assistant) so my job was about as unglamourous as it gets – emptying garbage cans, guarding doors in the pouring rain, trying not to yell “CUT” before the director did… Which I did once, by the way…

But my favourite moment was the day Extras Casting sent a woman with a spiderweb tattoo on her hand as Erica Durance’s hand double, and I was the last minute replacement. I was treated to a manicure in the makeup trailer, outfitted in the wardrobe trailer, then I got to sit on Lois Lane’s sofa and read her newspaper.

TWO)  You’re part of a team, but if you had sole control and  could take Detective Murdoch and Company anywhere in any set of circumstances where would they wind up? (Besides the present-day in The Murdoch Effect, of course.)

That’s an impossible question because we have almost no restrictions as it is!

Although I always wanted to do a follow up series to The Murdoch Effect, following each character: The Ogden Effect, The Crabtree Effect, The Brackenreid Effect. And if I was clever enough, have them cross several time periods and have all the stories intertwine. Maybe in the next life…

THREE)  My daughter is a writer who is facing a lack of confidence in her own skills; what do you do when faced with similar challenges? (I’m assuming all writers face the dreaded block and lack of faith in one’s abilities)

Writing is hard and painful, and equally rewarding and fun. I know that makes no sense but it’s the best way to describe it.

Everyone has a different process, but when I’m writing I doubt myself every step of the way. It’s an exercise in determination and ultimately a contest to fight the inner voice that tells all of us we aren’t good enough. Especially for women, where no matter how hard we fight against it, society still instills in us the belief that we aren’t as talented, as deserving, etc, so getting over our own insecurities is always the biggest challenge.

All I can do is trust myself, which isn’t always easy, and trust my fellow writers to help me when I’m struggling. And I can very gratefully say they always do.

FOUR)  It’s safe to say you’re one of the biggest Murdoch Mysteries fans in existence (besides myself). If fate – and Peter Mitchell – hadn’t brought you to MM, where do you think you would have wound up?

Stalking the sets just like all the other fans!

(For the record… I’m a virtual stalker and nothing more.)

FIVE)  You’ve written some of Murdoch’s most risqué scenes. Have you ever written anything that was deemed too hot for the CBC?

And speaking of wins, how about this 5×5, kids? I owe Michelle Ricci big time for being here today. It’s not easy to convince people to take a chance on a blogging bellman, but Michelle and everyone who has ever appeared on this blog have more faith in me than I do in myself. Thanks to all of you as well.

See you in the lobby and on the CBC, friends…

Husband. Father. Bellman. Author of The Bellman Chronicles. Reader of comic books and observer and chronicler of the human condition. And to my wife's eternal dismay, a mere mortal and non-vampire. I'm often told I look like your uncle, cousin, etc. If I wore a hat, I'd hang it on a hat rack in my home in Niagara Falls, Canada. You can call me The Hook, everyone else does.
View all posts by The Hook →
This entry was posted in Hotel Life and tagged CBC, Michelle Ricci, Murdoch Mysteries, Peter Mitchell, Smallville, writing. Bookmark the permalink.

8 Responses to 5×5 With The Hook: Michelle Ricci.