Kenna James is the girl-next-door, the real world Marcia Brady, the actress with the mostest…

Okay, so that went off the rails pretty quick. Moving on…

I first became aware of today’s guest through her Twitter feed but it was her positive energy that really put her on my 5×5 radar. For a long time I’ve wanted to feature people/performers/personalities from all walks of life on this blog. Which, when you look at who I am (a blogging bellman who meets people from all walks of existence) makes perfect sense. Kenna and I actually have a lot in common.

I can only assume you’re laughing right now. Or rolling your eyes. Or both. But bear with me, if you’d be so kind.

Kenna often plays characters who find themselves overwhelmed by bizarre circumstances – which get more bizarre with each passing second. She goes through these trials with a deer-in-the-headlights look but eventually rises to the occasion and emerges victorious. Until she goes through it all over again.

That’s my life in a nutshell. Sure, Kenna is an adult film actress portraying fictional characters who deal with over-the-top adventures and I’m a bellman who deals with over-the-top travelers who are far-too-real. But other than that… 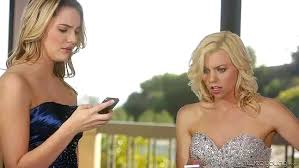 “I just found out I’m appearing on The Hook’s blog. Oh well, my career was fun while it lasted…”

At any rate, Kenna and I also have something else in common: Excellence in our respective fields. She’s the 2016 Penthouse Pet of the Year… and I have a plaque for being an exceptional bellman. Okay, so maybe she’s slightly ahead of me. But who’s keeping score. Shut up.

No matter how you feel about adult films (as far as in-room entertainment is concerned, they bring in serious cash in hotels so the corporate world loves them) I admire someone like Kenna who knows exactly who she is, what she wants from life and owns every choice she’s made. How many of us can honestly say that?

And when you look at the challenges facing society today, the adult film industry is hardly the harbinger of doom many claim it to be. Personally, I’d rather have someone from the adult film world running the United States of America rather than some of their recent choices…

But on with the show. I’m hoping you reach the end of this interview with a newfound respect for Kenna James. I know I did.

Take it away, Kenna!

ONE)  Please tell me something about Kenna James that would surprise people.

I think the thing that surprises most people about me is how normal I am. I’m not a diva, I’m not a sex addict and my house isn’t full of sex toys. I’m just your normal, everyday person with a job that’s not so normal. Lol.

I don’t party, I do zero drugs (not even pot). I rarely drink. Heck, I don’t even smoke cigarettes. When I’m home I stay home. I’m as normal of a person that you can find.

(What is this word, “normal”? I don’t encounter that word often in the hospitality biz.)

I see what Kenna means; there’d be no room in the house for sex toys with a ginormous teddy bear around…

TWO)  As the father of an eighteen-year-old daughter I’m amazed at the millennial mindset; they seem to want immediate success with no regard for the long game. Is there a Kenna James long-term plan or do you live in the moment career-wise?

I’m extremely upset with my generation’s mindset; hard work and personal responsibility have gone totally out the window. I was on my own at age seventeen. My home life wasn’t very good so I made the decision that if I wanted more I’d have to go out and get it myself. So I moved myself four hours away to a city I’d never been to, enrolled myself in high school, found a tiny apartment and got a job as a stripper in a little club to support myself.

I learned the value of hard work early on. My generation has their hand out and frankly it makes me sad.

THREE)  In your field it’s vital to eat right and stay healthy but we all have our weaknesses; what’s your favorite guilty pleasure? (A certain candy? Fast food?)

Pasta is my weakness. I love the stuff but carbs don’t love me. Lol

FOUR)  You radiate an unbelievably-amount of positive energy in your work, but everyone feels down from time to time; what brings you back up?

Everyone has ups and downs, no matter who they are or what level of success they’ve attained. Sometimes I work myself into total burnout mode. When I need a recharge I go home and hang with my cats or visit with my grandparents, that’s my happy place.

(I’m a family-oriented guy so this answer speaks to me on a deeply-personal level. Except for the fact that I was born in burnout mode, of course.)

FIVE)  You excel at the “straight-with-a-touch-of-humor” role (the unsuspecting soul who finds themselves in extraordinary circumstances) in your films and you never break character no matter what. Does that sort of focus come naturally or do you actually have a number of outtakes your fans will never see?

I took to performing really fast, it honestly comes pretty naturally to me. I can get a big script the day before a shoot and by the next day deliver the lines without much trouble at all. There’s always a few outtakes but not many.

(I’ve barely acted so I’m in awe of Kenna’s skills. As for being able to perform love scenes, I can barely stand it when people watch me eat, never mind anything else…)

Personally, I think this beats the hell out of the “I’ve no money to pay for my pizza” premise…

Was I right or was I right? Kenna is an amazing person and performer and I can’t thank her enough for being my first adult film actress. On the blog, I mean! Grow up, people! Actually, don’t bother. I tried it once; it sucks.

Husband. Father. Bellman. Author of The Bellman Chronicles. Reader of comic books and observer and chronicler of the human condition. And to my wife's eternal dismay, a mere mortal and non-vampire. I'm often told I look like your uncle, cousin, etc. If I wore a hat, I'd hang it on a hat rack in my home in Niagara Falls, Canada. You can call me The Hook, everyone else does.
View all posts by The Hook →
This entry was posted in Hotel Life and tagged Kenna James, Social media, Twitter. Bookmark the permalink.