She’s only been on this plane of reality a short while, but Mouna Traoré has already achieved the impossible.

Not only has she overcome a crippling Gummy Bear addiction (told you I was quirky, Mouna), she’s raised one of the best shows on television to even greater heights. Mouna inhabits the skin of Doctor Julia Ogden’s protégé Rebecca James when she’s on the set of Murdoch Mysteries and the drama – and the CBC as a whole – are richer for her presence. 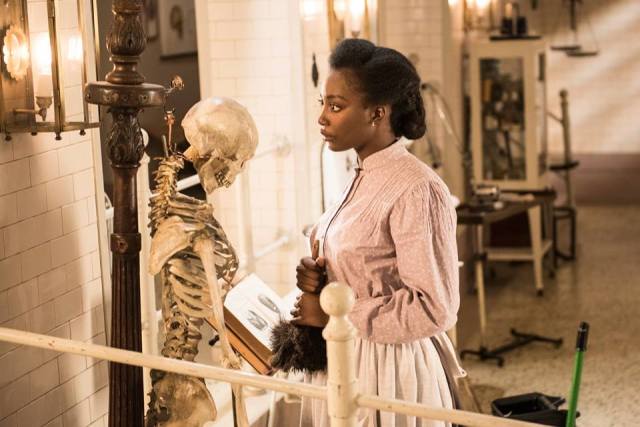 Stepping into an established show, especially one with as devoted a fan base as MM is no easy feat, but Mouna has made it look easy. Rebecca James is courageous, feisty, intellectually-curious and possesses layers that have caught the attention of viewers from the get-go. Not to be controversial, but Mouna’s presence also adds a much-needed sense of diversity to the cast. Rebecca Jame is not only struggling against society’s prejudices based on her gender, but her skin color as well.

Then again, I’m not surprised that this incredibly-talented actress (Like her predecessor in the morgue, Georgina Reilly, Mouna says more with her eyes than her most actors can say with hours of dialogue)  has taken on and thrived in this role. Even a cursory glance at Mouna’s acting resume so far reveals a thespian who prefers to choose quality over quantity. You can peruse it for yourself here. You didn’t think I was going to list it here, did you? What am I, Wikipedia?

Not only does Mouna burn up the small screen on MM, she’s currently shooting a “moving picture” called Brown Girl in the Ring: The Prequel, based on the tome by Nalo Hopkinson. In Mouna’s own words:

“It’s a dystopian, sci-fi film about a girl living in 2049 Toronto and how she’s battling with herself and her grandmother over whether or not she should step into these superpowers that she has that are connected through their spirituality.”

She had me at “superpowers”. What about you?

In addition to turn-of-the-century clothing on the MM set, Mouna Traoré also wears many hats. In addition to fifty Hello Kitty caps, she has her own production company, The Mini Films. Not content to merely bring another scribe’s words to life (brilliantly), she made her screenwriting debut in 2014 with her short film, “All of Me”. To top it all off, she’s a fun-loving, genuinely-sweet, forthright person and ridiculously-easy on the eyes.

But before the feminists among you begin to burn me in effigy, hear me out. I respect Mouna Traoré as an actress, a filmmaker and a human being, of course… but I’ll always celebrate a beautiful woman for the gift from the heavens that she is. Period. Now, on with the show! 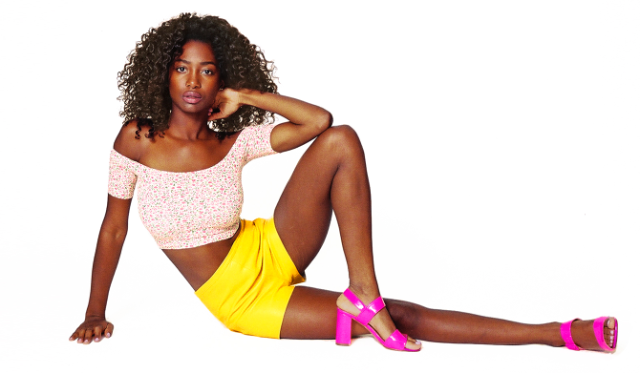 1)  Your wardrobe choices are restricted to a specific time period on Murdoch Mysteries… what’s your favorite animal?

I hate having to choose a favourite anything but if I had to say a favourite animal I would probably say a dog because I absolutely adore them.

One can only assume the little guy yakked after this. Either way, dogs really are the best.

2)  If you could be any piece of furniture, what would you be?

I would be a lamp because I would like to be able to light up peoples lives.

Told you she was a sweet gal…

3)  You’ve played characters from various time periods and of different temperaments; what’s your dream role? Or if you prefer, you can tell us about your dream project. (I know you wear many hats in your industry.)

My dream role is anything where I get to make out with Ryan Gosling. Or film in Hawaii.

Gosling’s all right. If you like intelligent, stupid-handsome, talented actors who have Russell Crowe on speed dial. Incidentally, I love Mouna’s sense of humor and honesty.

4)  As a bellman I’m fascinated with all things hospitality; tell me a bit about the best trip you ever took.

When I went to Australia New Zealand and Fiji in high school for a biology trip. It was incredible. We were never in one place for more than four days and we got to see all kinds of geography and environments. We spent several nights sleeping on a sailboat which was probably my favourite part.

5)  If you could address the entire world for a moment, what would you say? Besides, “Enough with the pet shaming videos and the Trump memes!”, that is.

Love the one you’re with.

I’d be a fool to try to follow Mouna’s homespun, genuine wisdom. A tip of my bellman’s cap to today’s guest, Mouna Traoré, for making an already-brilliant blog even brillianter. You really are made of awesomesauce, young lady.

Husband. Father. Bellman. Author of The Bellman Chronicles. Reader of comic books and observer and chronicler of the human condition. And to my wife's eternal dismay, a mere mortal and non-vampire. I'm often told I look like your uncle, cousin, etc. If I wore a hat, I'd hang it on a hat rack in my home in Niagara Falls, Canada. You can call me The Hook, everyone else does.
View all posts by The Hook →
This entry was posted in Hotel Life and tagged CBC, dogs, Mouna Traore, Murdoch Mysteries, Russell Crowe, Ryan Gosling. Bookmark the permalink.