5×5 With The Hook: Christopher De Voss

(Actually, the latter would be an excuse I’d accept.)

But for those of you who haven’t been spending time shadowing the Black Widow, there is no reason you shouldn’t be well acquainted with Christopher De Voss. The man is everywhere: His work is featured on his own site, (it’s all about who you know, apparently), that kick-ass corner of the web known as Long Awkward Pause, and even my site! (Yes, I invited him. That’s not the point. Shut up.)

What was my point?

Oh yeah, Christopher rocks harder than The Thing at an AC/DC concert. Simply put, the man is not only damn funny, he’s so down-to-earth he’s practically subterranean.

But enough of this bromance crap! Christopher is ten times the writer I am so I’m going to let him take the wheel and we’ll see where we wind up. Buckle up, kids…

1)  If you could unleash a zombie horde upon any Hollywood awards show which would you choose?

This is a tough question because you never want to unleash a zombie horde on anything. They multiple like cockroaches. They are tough to control and they are always hungry, and the family-sized Skittles bag is not going to be enough nourishment for them…  Especially since every Zombie in the world will only eat the red ones.

But if I had to… First we need to analyze the awards shows:  The Oscars I find quite boring. It really is not a lot of entertainment going on there. You have your host, which opens the show with some jokes, or a song, or a joke song…and then a lot of people thanking a lot of other people, all whom you don’t know.  Presenter: The Oscar for Outstanding Achievement in Set Design and Nipple Tweaking goes to….Harry Pincher!  *Harry comes up on stage, kisses Presenter awkwardly, especially since they are both guys, and doubly especially since Harry is 8ft2, and the Presenter is 3ft8*  Harry:

“Wow! Thank you! *strokes Oscar statue inappropriately* I’ll keep this short. I would like to thank my Mom, my Dad, my next door neighbors Sam and Shelly Duvail. I would like to thank my team, Joe, John, Jacob, Jingleheimerschmidt, and Lucy…am I forgetting anyone? Oh yes! My blanket and my three other personalities, expect Damion…he’s the mean one. He only comes out of me if I drink too many chai lattes…”

If we unleash Zombies on the Nickelodeon Kid’s Choice Awards…well, that would just be plain wrong…and a mess. There would be kid’s body parts and green slime everywhere, but more importantly…green slimed kid’s body parts.

The Tony’s I don’t think get many watchers so that might be a waste of a Zombie Horde. I mean if you’re going to unleash one, at least get some good viewership and tweets out of the thing.

I like the Grammy’s. They are pretty entertaining, so they would be safe on the list…unless Daft Punk released an album every year, and won every single Grammy every year…and everyone was so thrilled that the robots won everything…except they are not really robots! They are just regular guys wearing fancy motorcycle helmets! You can get your own at Bob’s Motorcycle Helmet & Arby’s Hat Shop in Queens!  So what I’m ultimately thinking is that I would unleash a zombie horde on Daft Punk.

2)  Long Awkward Pause is growing by the second, gathering the web’s best and brightest under its banner.  Are there any writers, living or dead that you’d love to enlist?

That’s a tough question as well because the talent on Long Awkward Pause is incredible already.  I’m just glad they took my bribe and let me join.  But if I could get anyone it would be Steve Martin, Dave Berry, Brian Regan, Alan Alda, and the guy who used to do The Far Side comics.

Although… I don’t know if I would be able to talk to any of them, as they are all idols of mine.  Well, not the guy who drew The Far Side comics, he is not an idol of mine.  I can’t draw.  I can’t even Photoshop well.  Sometimes I even have trouble downloading drawings.  I can color though.  I’m a damn good color-er.

And I think I could win an Oscar for Nipple Tweaking as well. (I know that kind of goes with the last question, but I was thinking about how cool a job that is, and to be an Oscar winner to boot.  That means you are the best damn Nipple Tweaker in the world!)

Our current line-up of writers is amazing: Adam, Rants, Ned, Aussa, WrongHands, Singlegirlie, Katie, Monk, Oma, Jack, Mike and Joe. The really raise the bar for me when it comes to creativity.  I just wish they would stop going out to lunch together without me.  They are nice enough to bring back some peanut butter crackers… dry, very dry, peanut butter crackers… no drink.

(But I notice you still gave them a shout-out – a long one. I thought I was sitting through a rerun of The Mickey Mouse Club! I kid Christopher, of course, but that’s only because I’m a dick.)

3)  Rob Ford: Worthy of the spotlight or a disgrace to politics, drunks and mammals everywhere?

He is making some changes. The guy likes to party, what can you say?  The real travesty here is that Chris Farley is dead, because I bet Chris Farley would have done a great Rob Ford impersonation.  Every Saturday, SNL is probably kicking themselves for not getting Farley some help sooner.

4)  Your favorite B-Grade actor is…

I do love me a good bad movie.  I think no one really does a really well B movie better than Danny Trejo.  He has made some of the best worst movies of all time. Dusk Till Dawn, Machete, Sushi Girl, Zombie Hunter, Eyeborgs, and the list goes on.  I probably should said Jack Riley, who is best known for The Bob Newhart Show because he is related to my family somehow… on a side note I think my Mom used to babysit Tim Conway. 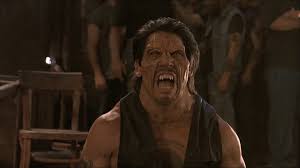 5)  Have you ever danced with the Devil in the pale moonlight?

The Joker actually said, “Have you ever danced with the Devil in the pale moonlight? I ask that all of my prey. I just like the sound of it.” Which justifies this to mean nothing.

So… no… no I have not. But I have  danced with Emma Matherson at the Third Grade Ball which lasted until 8:30 pm… a big deal at the time.  She broke my heart just two weeks later when she shared her Juicy Juice with Brad Harthorne.  Joke was on her though because Brad grew up and decided he liked boys, and then Emma came running back to me, wanting to split a Coke Zero years later… and guess what?  I told her I would, but instead I drank it all in front of her, and then burped the alphabet.  A couple years later she became my boss at the local Steak and Shake and fired me for  mixing up the pickles and the hot peppers.

So on second thought, maybe I have…

Well, I don’t know about you, but I have a newfound respect for Danny “Eyeborgs” Trejo now. I want to thank Christopher for slumming with us today and for making my corner of the web cooler than cool.

Husband. Father. Bellman. Author of The Bellman Chronicles. Reader of comic books and observer and chronicler of the human condition. And to my wife's eternal dismay, a mere mortal and non-vampire. I'm often told I look like your uncle, cousin, etc. If I wore a hat, I'd hang it on a hat rack in my home in Niagara Falls, Canada. You can call me The Hook, everyone else does.
View all posts by The Hook →
This entry was posted in Hotel Life and tagged Alan Alda, B-Movies, Christopher De Voss, Danny Trejo, Long Awkward Pause, The Academy Awards, The Far Side, The Oscars, zombies. Bookmark the permalink.

74 Responses to 5×5 With The Hook: Christopher De Voss