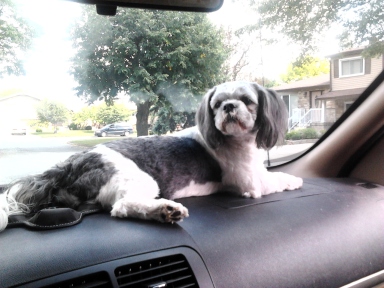 Hook’s dog, Chelsea, here – wait, scratch that, let’s be honest here, I rule that family and I do a petty good job too. Anyways…..

Yesterday was one heck of a day here in Niagara Falls; first the mercury rose so high my attempts to break my squirrel-chasing record were continually thwarted. Every time one of the little suckers could feel my breath on the back of their furry necks, they spontaneously combusted!

You think they’d at least wait until I could wrap them in bacon, but no, they had to be weak. Squirrels, man…

After the squirrel hunt proved to be a bust, I retreated to my dog cave – otherwise referred to by the family as the living room – to watch that loud, bright box you humans love so much.

(The family figures I’m chilling, but I actually pay attention to what goes on your world. I have to tell you, while you’ve made some advances in pet nutrition and overall care, I sometimes think you’re letting cats run the world, its in such bad shape!)

I want you to take a break from keeping up with those dog-awful Kardashians and groaning at the latest exploits of that monkey-abandoning Bieber twerp to read this.

If it doesn’t break your heart while simultaneously filling you with rage, then you need medical attention immediately, for your heart has obviously stopped.

Some people think simply because something isn’t human that means it isn’t entitled to the same baseline respect you’re supposed to show one another.

Animals think. (We simply keep our thoughts limited to the basics: food, shelter and whatever else we need for survival.)

Animals love. (Some of us are there for you at your happiest and lowest moments, although you don’t always realize it. Human science has proven how much our presence affects your medical health, folks.)

Animals feel. (Trust me, the feline in this tragic story felt every arrow as well as the loss of her litter.)

I’ve said my piece, so before I become a me-with-a-bone, let’s return to my misadventures with Mother Nature, shall we?

After she bestowed a fatal case of swamp butt upon the entire population of Southern Ontario, Mother Earth decided to close out the day with a storm that rivaled an act of Dog. It wasn’t raining cats and dogs, folks, it was thundering dinosaurs! (Trust me, that’s funny!)

There are only a few things that truly scare my race:

I spent most of my night seeking a suitable refuge from the storm, in-between wild races against an invisible opponent around the house, that is. Every time I’d find a perfect spot, VampireLover would “relocate” me to my room. Finally, I made my final escape sometime after after 3 a.m. (Sorry, but I can’t be more precise. Dogs can’t tell time!) and nestled myself behind The Hook’s butt until this morning.

(It’s a great spot; firm, yet soft, and the temperature will occasionally rise for a moment or two…)

He’s off serving the traveling public right now (Milk bones don’t grow on trees – unfortunately!), but he sends his regards. And before I forget, as you all know, my “master” is a huge comic book fan, so this story  about his favorite comic book store, Pulp Comics, caught his eye. And of you live anywhere near the Niagara region, it may catch yours as well. 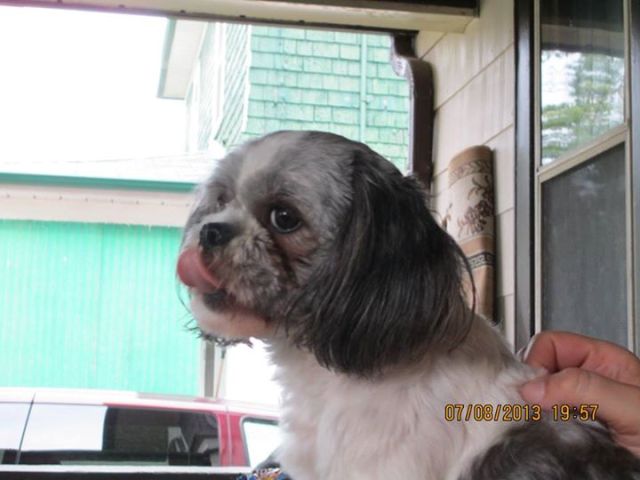 NOT HAVING SWEAT GLANDS SUUUCKS!

That’s all I have for now, my gentle two-legged readers. Enjoy your weekend and don’t forget to love your pet. If that Mickey Rourke guy can do it, anyone can.

Husband. Father. Bellman. Author of The Bellman Chronicles. Reader of comic books and observer and chronicler of the human condition. And to my wife's eternal dismay, a mere mortal and non-vampire. I'm often told I look like your uncle, cousin, etc. If I wore a hat, I'd hang it on a hat rack in my home in Niagara Falls, Canada. You can call me The Hook, everyone else does.
View all posts by The Hook →
This entry was posted in Hotel Life and tagged bacon, cats, comic books, dogs, Justin Bieber, Mickey Rourke, Milk Bones, Pulp Comics, squirrels, the Kardashians. Bookmark the permalink.